Coffee Beans:
GoldenEye 007 was released on November 2, 2010, in North America; with a software MSRP of $49.99, and a Golden Classic Controller Pro bundle MSRP of $69.99.  GoldenEye 007 for the Wii was developed by Eurocom, and published by Activision.

The debut game-play hours below are for the United States of America Wii owners, not world-wide.  From November 2 through November 22, how many hours of espionage have Wii owners participated in James Bond's GoldenEye 007?  Let's take a look! 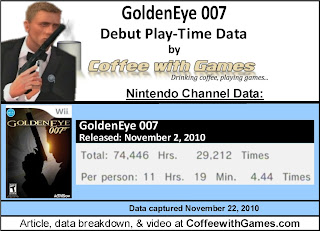 Approx. Number of Players Reporting Data:
GoldenEye 007 has 6,579 Wii owners reporting their play-time data, for its debut on the Nintendo Channel 21 days after its release.

Average Hours & Total Game-Play Hours Reported:
GoldenEye 007 has 74,446 Total Hours of game-play reported for its debut, with an average of 11 Hours 19 Minutes "Per person" reporting data.

The debut average play-time, per session, for GoldenEye 007 is just over 2 Hours 32 Minutes.

Randomness:
I'm not sure if it was Nintendo or Activision, but somebody took longer than usual getting GoldenEye 007 listed on the Nintendo Channel.  I had been checking for the last few weeks, and the game wasn't even listed, until last night.  Though the game appeared last night, it didn't have any play-time data showing, until it was updated today.
Also, now that GoldenEye 007 is listed on the Nintendo Channel, the "copyright" text below it is incorrect.  Again, that could be Nintendo putting up the wrong information, or Activision just sending the wrong information over.  Here's the "copyright" text that is showing beneath GoldenEye 007 right now: 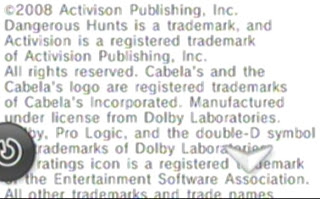 Apparently, Activision(or Nintendo) wants GoldenEye 007 to be associated with Cabela, and the Cabela hunting games?

Thoughts:
GoldenEye 007 is off to a good start with the game-play data shown, and I think the game will continue to see steady increases each week throughout the Christmas/holiday season.
I have been playing GoldenEye 007 on a regular basis since I purchased it.  I completed the single-player campaign back on Friday, November 5(early Saturday technically).  I plan on going back and completing the single-player campaign on all the difficulty settings, but I am enjoying the online multi-player in the meantime.
If you haven't seen any footage from GoldenEye 007's online multi-player, here is a video of a Team Conflict match, played on the Facility level:


Questions:
If you own GoldenEye 007 for the Wii, what are your thoughts on it?  What do you enjoy about it, and is there anything you don't enjoy about it?


If anybody is interested in either GoldenEye 007 sku, you can see prices for both on Amazon.com linked below:

Posted by coffeewithgames at 4:40 PM