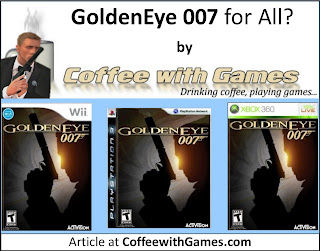 Coffee Beans:
GoldenEye 007 on the Wii was a huge surprise to many when Nintendo showed the debut trailer for it at E3 this year(though because of the idiocy at IGN, it was spoiled to many the day before, when they uploaded the trailer and left it public for a few hours).
When the announcement was made, many people probably wondered like me, "Will this GoldenEye be just like the original?"
Two questions that also seemed to surface quickly after GoldenEye 007 Wii's announcement was, "Why the Wii?", and whether or not it would stay a Wii exclusive.

I have seen a few comments that GoldenEye on the Wii can't be ported to the other consoles, because of Nintendo holding the license to the original; and also because Nintendo helped Activision with this version of GoldenEye, by providing advice and working some with Eurocom during development.

So, from the information that we know about GoldenEye on the Wii, and past GoldenEye video games, does evidence suggest it will remain a Wii exclusive, or will it be a timed "exclusive" like many other games in history?  Can GoldenEye 007 on the Wii legally be ported to the Xbox 360 and PS3?  Let's take a look...

Roasting - GoldenEye's Console Gaming History:
GoldenEye 007 was originally released on August 25, 1997.  The game was developed by Rareware, and published by Nintendo, for the N64.  The game was based off of the James Bond movie of the same name, and had players playing through levels as James Bond, who was imaged after Pierce Brosnan from the movie.  The game received critical praise when it was released, and sat at the top of the Nintendo sales chart for months. 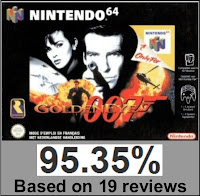 With the release of the new consoles this generation, and services like Microsoft's XBLA and Nintendo's Virtual Console, many wondered if GoldenEye 007 would get re-released.  Rare developed GoldenEye, but was purchased by Microsoft; Nintendo published GoldenEye 007.  So, according to many reports, both Microsoft and Nintendo would have to agree on re-releasing the game, but that hasn't happened.

Fast-forward again, to Tuesday, November 2, 2010.  GoldenEye 007 for the Wii was released, and since the initial announcement at E3, we learned that GoldenEye 007 on the Wii isn't a direct port of the N64 version, but it is a remake/re-imagining of the original Nintendo 64's GoldenEye 007 and the GoldenEye movie.
GoldenEye 007 for the Wii was developed by Eurocom, and published by Activision; and Activision holds the James Bond license for making any James Bond video games.
While GoldenEye 007 Wii has only been out a week now, the game seems to have been received pretty well by the "professionals".  While the game isn't reviewing as well as the original did, it is reviewing better than GoldenEye: Rogue Agent did a few years back.

While players play as James Bond, they aren't playing the Pierce Brosnan James Bond character, instead James Bond in GoldenEye 007 for the Wii is imaged/acted by Daniel Craig, the current actor filling the role of James Bond in the movies and games.

Brewing - What We Know:
So, we have three video games set in the James Bond universe, that all have the name GoldenEye in their titles.  Two are console "exclusives", while one was a multi-console release.
As soon as the new GoldenEye was announced at E3, it seemed every preview/hands-on with the game quickly adapted to calling the game just "GoldenEye".  With the initial trailer showing off footage from the dam level, and gamers repeatedly hearing/reading "GoldenEye", many thought it was going to be a direct port of the original.
The levels in GoldenEye 007 Wii are not designed exactly the same as the N64's GoldenEye, and there are different levels in the single-player campaign, as well as the multiplayer.
One of the regular readers here on CoffeewithGames said two of his friends purchased the new Wii GoldenEye, but are planning to return it.  Why were they planning to return(or trade-in) GoldenEye already?
According to NicodemusatNite, when speaking about his friends that purchased and are planning to return GoldenEye, he said, "Yeah, they didn't like the controls, and the multiplayer levels...(the) multiplayer levels aren't the same, and that was the biggest reason they got the game."

While it appears Nintendo gave advice to Eurocom, only a few Nintendo employees are given a "thank you" in GoldenEye 007's credits. 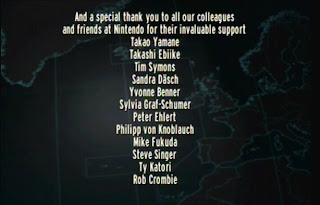 I think this "Thanks" is a big key whether GoldenEye 007 can be ported to the PS3 and Xbox 360, as it's a "Thanks" and not an actual credit to Nintendo for anything specific on the development/publishing side.

The Cup of Coffee aka The Verdict:
Here's the list of things that are different from GoldenEye 007 on the Wii, compared to the original GoldenEye 007 on the Nintendo 64:
As for Nintendo being mentioned in the credits, I researched a few of the names from the Nintendo "thank you" list in the credits, and most seem to be in management or licensing departments/positions at Nintendo.


If you are interested in GoldenEye 007 for the Wii, or GoldenEye 007: Reloaded for the PS3 and Xbox 360, you can see prices listed on Amazon.com linked below:
Posted by coffeewithgames at 2:03 AM