The game-play hours below are for the United States of America, not world-wide.  So, from October 17 through November 1, how many hours have Wii owners weaved into the kingdom of Patch Land, with Kirby and possibly also with Prince Fluff?  Let's take a look... 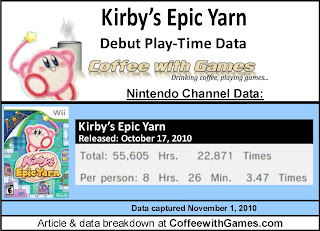 Approx. Number of Players Reporting Data:
Kirby's Epic Yarn has 6,591 Wii owners reporting their play-time data, for its debut on the Nintendo Channel 16 days after it released.

The average play-time per session for Kirby's Epic Yarn is just over 2 Hours 25 Minutes.

You can see the customer review score breakdown in the picture below: 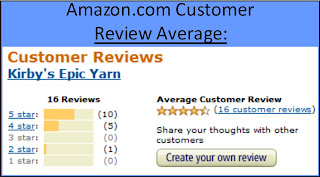 Thoughts:
For comparison: Kirby's Epic Yarn had its game-play hours debut faster than Sin & Punishment: Star Successor, and also faster than the recent Wii release, Wii Party.
I have not played Kirby's Epic Yarn, and due to reading that it's a shorter gaming experience, I'll probably just end up renting it one day; or waiting for a price-drop on it.  I don't know if the game-play hours reported "Per person" correctly reflect about how long the game completes, but from what I have read it seems like it would be about right.
The Amazon.com sale rank for K.E.Y. actually surprised me when I checked it.  I wasn't expecting the game to even be in the "Top 20" on Amazon.com, much less the "Top 10"; but perhaps the overall positive reviews and the "newness" of Kirby's adventure is helping the game's sales, and I think it'll be interesting to see how it performs throughout the Christmas holiday, compared to other Nintendo Wii games.
Kirby's Epic Yarn has been reviewed really well overall, and it seems that the biggest "complaint" against the game is that it's to easy.  I found the 2 star rating customer review on Amazon.com really interesting, as it was a mom writing her son's experience with the game.
Questions:
Have any of you played Kirby's Epic Yarn, or plan on picking it up over the next few months?  If you have played K.E.Y., what do you think about it; and if you have beaten it, how long did it take you to finish it?
If you are interested in Kirby's Epic Yarn, you can see prices for it on Amazon.com linked below:
Posted by coffeewithgames at 10:46 PM