(S&P:SS) was released on June 27, 2010; with a MSRP of $49.99.  S&P:SS was developed by Treasure, and published by Nintendo.  The data below is for America game-play hours, not world-wide, even though Sin & Punishment: Star Successor was released in Japan and also in Europe. 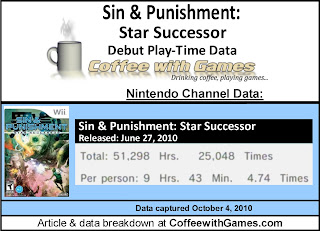 "Total" Game-Play & Average Hours Played:
S&P:SS has 51,298 Total Hours reported for its debut, with an average of 9 Hours 43 Minutes per person reporting data.

The average play-time per session for Sin & Punishment: Star Successor is just under 2 Hours 2 Minutes.

On Amazon.com, S&P:SS has a 4 out of 5 Star rating, based on 15 customer reviews.  You can see the customer review score breakdown in the picture below:
Thoughts:
While Sin & Punishment: Star Successor hasn't lit up the sky with awesome sales, I think for a first-time retail venture in America with the franchise, the game-play data is encouraging.  S&P:SS definitely isn't one of Nintendo's better known franchises, and to see game-play data appear just 100 days after S&P:SS released is pretty impressive, when comparing it to certain third party games.
I don't own S&P:SS, but I think I remember reading the game takes between 4-5 hours to complete on a single play-through; if that is the case, the data reported is showing that Wii owners are playing the game at least twice.

Questions:
Have any of you played through Sin & Punishment: Star Successor?  If so, do you remember how long it took you to complete the game?


If you are interested in Sin & Punishment: Star Successor, you can see new and used prices linked on Amazon.com below:

Posted by coffeewithgames at 11:28 PM