DJ Hero - How Much Have the Turntables Been Spun

Coffee Beans
DJ Hero was released on the Nintendo Wii, Xbox 360, PlayStation 3, and the PlayStation 2, on October 27, 2009.  The game and turntable unit was developed/published by FreeStyleGames and Activision, and I believe the basic DJ Hero Turntable bundle released with a MSRP/List Price of $119.99.  The game has seen a price-drop from its originally MSRP, and now has a list price of $69.99 at most retailers.

The play-time data shown below, is only for the Wii version of DJ Hero, and it reflects play-time reported in the United States of America, not all of North America.

So, with 357 days of game-play data reported since DJ Hero released, how much have Wii owners been spinning and scratching their DJ Hero turntables?  Let's take a look!


Review Score Averages
The Wii version of DJ Hero has a review score average of 85.94%, based on 18 "professional" reviews. 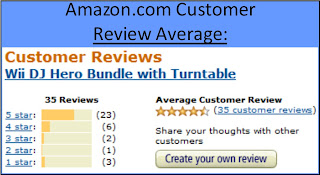 Thoughts
I did not purchase the originally DJ Hero, but I did briefly play a demo Best Buy had setup.  Mrs. Coffee and I had gone to Best Buy, looking for a CD.  We saw the DJ Hero demo setup, and she actually gave it a spin(haha!).  It took her about one round to get used to the controls, and she did pretty well in her second round.

I played one or two rounds after she did, but that has been the extent of my DJ Hero play-time.

I think DJ Hero is a game that shows Activision was willing to gamble with something new.  While the original DJ Hero got off to a slow sales start, the game has since sold 1.2 million copies (I thought it was 1.6 million now, but couldn't find the article!).

I tried to see how much a DJ charges per hour, and the average amount seems to be right around $200/hour.  If Activision were making $200/hour off of Wii owners' DJ Hero game-play hours, they would have made $102,648,600 so far...I can see Bobby Kotick's eyes glazing over, if he reads that!

As for the game-play data in general though, it's definitely not as high some Wii games released around the same time last year, but I think it's encouraging for a new IP.  I think it will be interesting to see if DJ Hero 2 performs as well as the original.

I have been tempted a few times to purchase the original when I have seen it go on sale, but I haven't done so yet.

If you are interested in the original DJ Hero, you can see the main bundle listed on Amazon.com below:
Posted by coffeewithgames at 5:23 PM