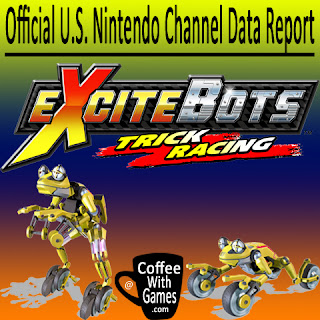 Coffee Beans
Can you imagine a video game sales pitch to a publisher which mentions, "Sandwiches: Drive through the ingredients in the proper order to make a delicious sandwich.", as a mini-game feature? Probably not? Yeah, I couldn't either until I saw it in motion and did just that in ExciteBots: Trick Racing on the Wii!

ExciteBots: Trick Racing released for the Wii in the U.S. on April 20, 2009, with two SKUs available for purchase. One SKU included the game with the Wii Wheel peripheral, the other SKU was just the game only.

ExciteBots was developed by Monster Games, the same developer behind the Wii launch title Excite Truck and the 3DS launch title PilotWings Resort. The game was published by Nintendo, and received an ESRB rating of "EVERYONE" with "Mild Fantasy Violence" listed as content for parents and gamers to be aware of.

The Brew
ExciteBots: Trick Racing has approximately 58,393 U.S. Wii owners with game-play data reported through the Nintendo Channel. The game's 875,169 Total Hours of reported game-play (seen in the image above), is equivalent to the game being played for almost 100 straight years!

The game's reported average of 15 Hours 0 Minutes "Per person", makes ExciteBots: Trick Racing the Wii's most played game in the Excite series on the system. That's more hours played "Per person" than Excite Truck, the Wii NES Virtual Console Excitebike release, and the WiiWare Excitebike: World Rally release. U.S. Wii owners have averaged playing the game about 1 Hour 29 Minutes each time they play it, according to the data from the image.

How was ExciteBots received by critics and customers? The game currently has a "professional" review score average of 80.19%, based on 27 reviews from GameRankings.com. The current customer review score average is 87.77%, based on 54 reviews for both SKUs of the the game on Amazon.com. Overall, positive reviews from critics and customers that played the game.

If you're interested to see what I wrote about the game over 2 years ago, you can read my piece "An Exciting Wii Racer - Ignored by Nintendo, Not Known by Wii Owners" HERE. If you're interested in reading an actual review (one with a score!), I suggest you check out SuperPhillip's review for ExciteBots HERE (If you're a fan of Saved by the Bell, you should spot a reference to the series in it!)

Caffeinated Thoughts
First, let me answer the second question (okay, really like fourth question) from above. If you own a Wii, or even a Wii U, is ExciteBots: Trick Racing a game you should look at buying? YES! If you enjoy arcade racing type games that have a great sense of speed, I highly recommend you give ExciteBots a try. The game can be found for under $20 new, and under $10 used. (Only $5 used HERE, at GameStop!) Now, if you're a Wii U owner interested in the game, you just need to make sure that you own a Wii Remote as well, because Wii games can't currently be played with the Wii U GamePad.

As for my reported game-play time with ExciteBots, the image above shows my reported time with the game as it appears on the Nintendo Channel. So, I have just over three times the number of hours played, as the reported average "Per person". Again, if you can grab the game now for under $10 used (I doubt Nintendo is still publishing it), I would highly recommend that you do so. You should easily be able to get around 10 hours of game-play from it just enjoying the single-player racing campaign on your own, without even playing local or online multiplayer or the mini-games in it.

Like I mentioned in my piece over 2 years ago, ExciteBots: Trick Racing had little (to no) advertising before and after it released, which I find unfortunate and might be a reason you have never heard of it (or, simply forgot about it quickly). If you haven't seen any footage from the game, the video below should give you a good idea of how the races are set up. The races in the video are of me racing online against Daemion from MyLittleGamer.Blogspot.com:

Monster Games (again, the developer) has a pretty solid record of racing games now, and in just a few shorts weeks their next game will be released for the Nintendo 3DS, Donkey Kong Country Returns 3D. I'm glad to see Nintendo has apparently formed a good developer/publisher relationship with Monster Games, allowing the developer to even try new things outside of their racing roots with series like PilotWings Resort and now porting Donkey Kong Country Returns 3D.

Questions
If you perhaps played both Excite Truck and ExciteBots: Trick Racing on the Wii, which game did you enjoy more? If you enjoyed ExciteBots as much as I did (or, perhaps even more and paused playing it to leave a comment!), do you hope that Nintendo will get Monster Games to make an ExciteBots sequel for the Wii U?

Also, if you have played a lot of racing games on the Wii, can you think of one that is perhaps more hilariously bizarre and fun to play than ExciteBots?

You can purchase some of the games developed by Monster Games for Nintendo platforms linked below!

Posted by coffeewithgames at 9:13 PM