Coffee Beans:
Last Monday, Nintendo of America President Reggie Fils-Aime said that "...more than 3 million Wii systems have already connected to Netflix...".
The 3 million Wii systems, that had connected to Netflix at that time, were using a Netflix disc, that had to be in the Wii's game disc slot.  Last Monday, a brand new Netflix Channel became available for download through the Wii's Shop Channel, for free, as long as you have a monthly Netflix membership.

According to the Nintendo Channel data, how many Wii owners ditched the Netflix disc, for the new Netflix Channel since last week; and how much has the channel been used?  Let's take a look... 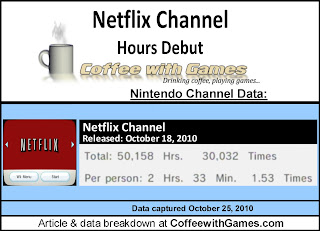 Approx. Number of Users Reporting Data:
The new Netflix Channel has 19,628 Wii owners that downloaded it AND are sharing their Netflix Channel usage through the Nintendo Channel.


Thoughts:
I received an email from Netflix about 2 weeks ago, letting me know I could try the service out for a free 30-day trial.  I knew we had family coming to visit, so I signed up for the trial, and requested to receive the Netflix discs for my Wii and PS3.  On Thursday, October 14, I received my discs in the mail, and installed the Wii disc first.  I was hoping the Netflix service would work well, and that we would get some good use out of it when our family was visiting.
Well, the first night we used the Netflix service on the Wii, I was really impressed with it.  The Wii pointer functionality works really well, and the use of the d-pad is nice as well.  However, the one odd thing I found about the Netflix disc service on the Wii, was there was no "search" function for movies or shows.  I even hopped on a message board, and saw somebody had mentioned a new Netflix disc was going to be released with a "search" function, so that had me hopeful.
I had no idea that just 4 days after receiving our Netflix discs, the Netflix Channel was going to be available for download.  The new Netflix Channel not only eliminates the need for the disc, but it also added the "search" function I was hoping for.

If you haven't seen the new Netflix Channel in action on the Wii, here's a video I just recorded of it, and of my attempt to use the "search" function to find Saved by the Bell


The Netflix Channel had data usage debut only one week after it was available for download, which is really well for something off of the Wii's Shop Channel.
While the total of Wii owners reporting the Netflix Channel data is just a little over half of one percent of the overall Wii Netflix users, I expect to see that number increase steadily over the next few months.

Questions:
Are any of you using Netflix on the Wii?  If so, have you downloaded the new Netflix Channel, and what do you think about it?
Posted by coffeewithgames at 7:05 PM