As for the "Best Buy Ripoff Alert" in the title, I stopped by Best Buy on my way home today(Monday), and I thought it was interesting to see what they had the Monster Hunter Tri - Classic Controller Pro Bundle listed for.  Take a look: 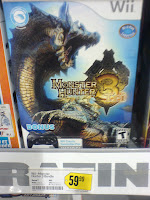 , the software only, Amazon.com sale rank is #827, and the current selling price is $39.96.
Monster Hunter Tri - Classic Controller Pro Bundle's

Amazon.com sale rank is #1,065, and the current sale price is $49.96.
Thoughts:
I think the increase, of over 100,000 game-play hours since last week, is extremely well for Monster Hunter Tri.  The game is seeing game-play hours being reported on a weekly basis, that many third party games won't see reported during the Wii's life cycle.
I haven't monster hunted any in the last week, as we had family in visiting; but that did result in me drinking lots of coffee!
Here's a video from another monster hunt I went on with Apoc, Maxi, and Seph.  You may remember from last week, Maxi and Seph run their own gaming site, NinTemple.com.  Here's the hunt:
Questions:
Do any of you think Best Buy is ripping consumers off with the list price on the Monster Hunter Tri bundle being at $59.99, when Capcom specifically mentioned its new price was going to be $49.99?  As for monster hunting specifically, have any of you been monster hunting since last week?
I think it's Best Buy being Best Buy, but hopefully consumers and Wii owners will be made aware of the price they can get the MH Tri bundle for other places.
If you are interested in Monster Hunter Tri, you can see both versions on Amazon.com linked below:
Posted by coffeewithgames at 2:41 AM