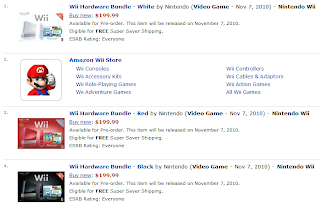 Coffee Beans:
Nintendo of America finally announced this morning, when they will be releasing the Red Wii Bundle in North America.
If you are interested in the 25th Anniversary Edition Red Wii bundle

that Nintendo is releasing on November 7, in North America; now you can pre-order it HERE, to make sure you aren't rushing out with the crowds to find one.

Amazon.com is taking pre-orders on the Red Wii Bundle

, and it will include the original Wii Sports and New Super Mario Bros. Wii, as well as the new red Wii Remote Plus and red Nunchuk, all for $199.99.
Red Wii Hardware Bundle for $199.99 Pre-Order Page

Interestingly enough, Amazon.com appears to have confirmed also that there will be new packaged White and Black Wii console bundles, including the Wii Remote Plus, along with the usual Wii Sports and Wii Sports Resort games:
Wii Hardware Bundle - Black


If you are interested in any of the new Wii bundles, you can see them on Amazon.com linked below for pre-order:

Posted by coffeewithgames at 3:00 PM