Interview: Sniper Elite V2 Wii U - What about an eShop digital version, demo, and reasons to play this version?

Coffee Beans
Did you know that Sniper Elite V2 on the Wii U runs at a higher resolution than the Xbox 360 and PlayStation 3 versions, due to the Wii U's hardware strengths? If not, you can read where Rebellion's CEO and Creative Directory, Jason Kingsley, said it in the first interview about the game posted up last week, HERE.

Sniper Elite V2 released last month for the Wii U on May 21st, and it received an ESRB rating of "MATURE" with "Blood and Gore, Intense Violence, Language" listed as content for parents and gamers to be aware of. If you're looking to buy the game, you should be able to find it now on sites like Amazon.com and in stores like GameStop.

What if you're a Wii U Deluxe Set owner and like downloading your games to take advantage of the Deluxe Digital Promotion though? While there isn't a Wii U eShop digital version yet, I did ask 505 Games about it, as well as if they are planning a demo for the game. Brew yourself some coffee, and read on to find out those details as well as what features Wii U owners might enjoy if they have already played another version of Sniper Elite V2!

The Brew
When I asked 505 Games if Sniper Elite V2 will get a Wii U eShop demo of some sort, their response was very straightforward like when I asked them about the DLC for the game.

They answered, "We currently do not have any plans for this." 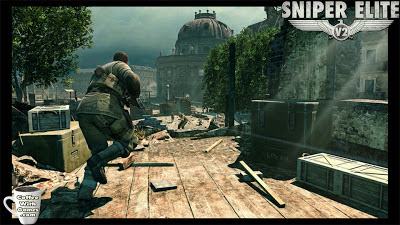 What about getting the full game on the eShop for purchase though, so Wii U Deluxe owners might be able to get the game and take advantage of the Deluxe Digital Promotion? The answer to this question wasn't as clear.

I specifically asked, "While the Wii U version is having a physical retail release, is there a plan to make Sniper Elite V2 available to purchase from the Wii U's eShop? If so, when can Wii U owners that perhaps like to buy their games digitally look at getting the game? June? July?"

505 Games responded with, "We are currently discussing this.", but didn't clarify any further on it. So, being that it had been almost 2 weeks since I first asked about, I asked about it again to make sure there hadn't been any change from the first answer. They responded that there is still, "No news about the Wii U Shop". 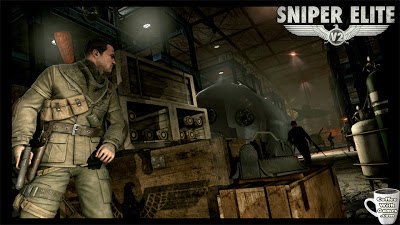 Now, if you're a Wii U owner and have perhaps already played another version of Sniper Elite V2 (or, have access to another version), what features might you find enjoyable and notice make a difference from the other versions? Being a Wii U and PlayStation 3 owner myself, this is something that I was interested in.

I asked, "If there are Wii U owners that have perhaps already played Sniper Elite V2 on another system, what GamePad features do you think they would really enjoy and notice make a big difference from the other versions?"

Rebellion's Mr. Kingsley, the CEO and Creative Director, answered this saying, "Well firstly there's obviously the mirroring allowing the game to be played completely on the GamePad. This could be a big thing for gamers who don't want to disturb partners sharing the TV, or want to try and play Sniper Elite V2 in bed! Being a fiercely adult game, the privacy aspect could be handy too if the player has children and obviously doesn't want them to watch the game on the TV as they're playing. I think above all though, the GamePad enhances the tactical elements of the gameplay to help you avoid open firefights as much as possible. Being able to now track the positions of traps and explosives, see your heart rate (important when making precision shots) and other subtle tweaks really help make the stealth and setting up the perfect shot more rewarding."
Caffeinated Thoughts
As for Mr. Kingsley's response, being a parent with young children, I can greatly appreciate the Off-TV GamePad play. I have used it in many Wii U games, and find I often use it the majority of the time to play games if it's an option. Even Bean 1 uses it for playing some Wii U games.

Personally, I think that having a demo of at least one level from the game would be a great way to let Wii U owners interested in the game (and who perhaps have already played another version of it), see how it plays and the benefits the GamePad adds to it. Sniper Elite V2 has a demo on Steam, so it would be nice to have an option to try the game out, especially considering many other Wii U games have demos available now.

If you missed the launch trailer for the game, you can see it below and some of the Wii U's features mentioned:

I think having Sniper Elite V2 on the Wii U eShop from the first day it released, along with a demo, might have been the best way to get the game out and create a positive buzz for it, despite it lacking some of the content found in the other versions. The demo could have been tailored around a specific level that took good advantage of the GamePad quick weapon selection and enemy tracking features, as well as giving Wii U owners a good feel for the overall gameplay.

Questions
If you have played Sniper Elite V2 on the Wii U, what do you think about the game? If you have already played and beaten the game, do you know how many hours it took you from start to finish?

You can buy the different versions of Sniper Elite V2, from Amazon.com linked below:

Posted by coffeewithgames at 1:00 AM