Sonic and the Secret Rings, how much has it been played? Official Nintendo Channel data report 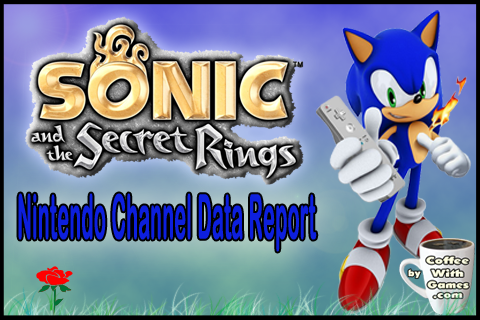 Sonic and the Secret Rings was Sonic's first retail outing on the Wii in the "action platforming" genre, the first of many though. The game was developed by SEGA of America, and released for the Wii on February 20, 2007. It received an ESRB rating of "EVERYONE" with "Cartoon Violence" listed as content for parents and gamers to be aware of.

If you own a Wii, or even a Wii U, you can find Sonic and the Secret Rings for under $20 now if you're interested in the game. How many hours can you expect from Sonic's first action platforming Wii game though? Brew yourself some coffee, and let's take a look at the official U.S. Wii Nintendo Channel data to get an idea!

The Brew
Sonic and the Secret Rings has approximately 707,727 U.S. Wii owners who have 9,108,257 Total Hours of game-play reported, with about 2,295 days reported. U.S. Wii owners have averaged a total of 12 Hours 52 Minutes "Per person" of play time with the game, which averages out to be about 1 Hour 25 Minutes played per time reported. So on average, Wii owners spend about an hour-and-a-half with the game each time they sit down to play it.
How does Sonic and the Secret Rings' hours "Per person" compare to the other Sonic Wii games? Well, its average reported is actually the lowest out of all the retail Wii Sonic games in the "action" genre. It's lower than Sonic and the Black Knight, Sonic Colors, and Sonic Unleashed.

Caffeinated Thoughts
The last Sonic game I purchased in the action platforming genre was Sonic Adventure, and I did purchase Sonic and All-Stars Racing Transformed for our Wii U this last December, and I have enjoyed my time with that game. I was a fan of Sonic Adventure on the Dreamcast and really liked the game (could be nostalgia, but I enjoyed it for a number of reasons, one being the VMU usage).

I am definitely interested to see how this game turns out, especially with Nintendo getting behind it enough to make it an exclusive for the Wii U and 3DS when it releases. I like the brightness and colors of the game seen in the trailer, as it somewhat reminds me of Sonic Adventures. Also, seeing what looks to be 2D/3D gameplay elements mixed together, has me interested to see how it all fits together.

Now, will Sonic Lost World remain as an exclusive for the Wii U and 3DS at least until a Wii U successor releases from Nintendo, or will it just be an "exclusive" for a limited time like other games have been in the past? I think that remains to be seen, but either way, I hope it turns out to be a great Sonic game. Also, for the sake of the game, hopefully it has a release date that is sooner than expected (June or July would be nice), and releases at least 2 months before the first 3D Mario Wii U title, so that it's not competing against it for sales right away.

Are you interested in winning The Humble Bundle 8 games, as mentioned in the image above (the basic games, seen below)? If so, simply like this post on CoffeeWithGames' Facebook page, HERE, to get one entry!
Questions
If you played Sonic and the Secret Rings, what did you think about the game? Would you recommend it to Wii or even Wii U owners who might be interested in picking up a cheap Sonic game until Sonic Lost World releases?

If you consider yourself a Sonic fan (or, even perhaps not), are you excited about Sonic Lost World from what you have seen and looking forward to learning more about the game?

You can buy Sonic and the Secret Rings from Amazon.com below, as well as pre-order Sonic Lost World for the Wii U and 3DS:

Posted by coffeewithgames at 2:10 PM