Coffee Beans
October has vanished like Halloween candy from a kid's basket! If you skimmed here occasionally during October, here are some posts you might have missed:
1) Is Okami for the PS3 worth $20? How many hours can you expect from Okami? Data Report
2) Can the Wii U GamePad be charged with a USB port on the console? Nintendo answers, sort of...
3) Nintendo says no, then yes, now no AGAIN on LEGO City: Undercover's multiplayer feature.
4) New Super Mario Bros. U to have online multiplayer? "Online Interactions Not Rated..."
5) What is the most played Just Dance Wii game?
6) STAY CALM! Wii U's Miiverse details before launch, & all Wii U features and functionality ready at launch? Nintendo's Bill Trinen and Scott Moffitt
7) "Black Ops II will just be on Wii U", Call of Duty: Black Ops 2 not releasing for the 3DS, DS, or Wii.

November is now brewing, and what coffees did I consume and games did I play during October? Brew yourself some coffee and let's take a look!

Another coffee that we brewed quite often in October, one Mrs. Coffee gave me as one of my birthday gifts, was the Gevalia Espresso Roast. The name says it all really, "Espresso Roast" and it is a nice, super dark, roast. I enjoyed it a great deal, but it was a tad too strong for Mrs. Coffee's liking. 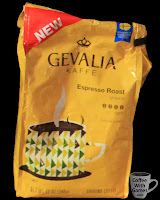 All Super Mario Games - I'm still playing these with Bean 1, randomly. The Mario game(s) he selects to play can vary each day, but in October Super Mario 64 was a favorite of his, as well as New Super Mario Bros. Wii. We have made decent progress in New Super Mario Bros. Wii, and when he requests me to play through a level with him, I am instructed to carry him through the entire level. He doesn't want to bubble necessarily (he did enjoy doing that for a while), he just wants me to carry Toad, Luigi, or Mario (depending who I'm playing as) through the level and survive. He recognized and called out New Super Mario Bros. U in the first Wii U system commercial Nintendo released yesterday, then went back to his snacks. 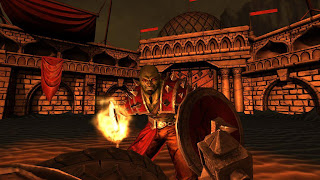 Rage of the Gladiator - I'm just going to leave the following link for a site that covers a lot of digitally downloaded titles: http://www.facebook.com/RageOfTheGladiator.
Batman: Arkham Asylum - Our neighbors are gamers, and we have loaned/traded games over the last few years. The last loan-trade was me giving him Metroid: Other M, and me getting Batman: Arkham Asylum in return. I completed Arkham Asylum in October, and I enjoyed my time with the game. Being that the game can be found for under $20 new, if you have been interested in this title but not played it, I can easily recommend the game.
Mutant Mudds - I'm still playing through Mutant Mudds, and enjoying it. I have said it before, and I'll say it again, if you enjoy challenging platformers, I recommend you give the game a try. Bean 1 had discovered the start menu on my PC and I have randomly found him attempting to play the game a few times, and he will tell me sometimes to play "Mutant Mudds" so he can watch me. I'm waiting to learn more about Mutant Mudds Deluxe for the Wii U, before I worry with buying the Xbox 360 controller to make it easier for Bean 1 to play it on my PC.
LEGO Pirates of the Caribbean - Mrs. Coffee gave me this as a gift a few months back, but it wasn't until October that I actually opened it up. I have completed the first movie's levels so far, and have enjoyed my time back in a LEGO video game world. I think the developers did a great job making LEGO Captain Jack run/walk like he does in the movies, and I like how in certain levels there aren't hidden/invisible walls to keep you from venturing further than they want, but an actual LEGO shark in the water to help keep you where they want you.
Double Dragon Neon - I won this in a contest/giveaway over on Chalgyr's Game Room, and played through the first level, and almost finished the second level (maybe third?). The game plays well so far, and the boss I'm currently on though was giving me quite the challenge my first night, and after a few attempts I had to get that thing some call sleep. I haven't been back to it since, but I do plan on trying to finish it up this month.
Punch-Out!! - I'm slowly making my way through the game's Title Defense Mode, and I believe Bear Hugger was the last boxer I was able to get my belt back from. Yes, he pummeled so many times while I was trying to figure out the new timing of his attacks. 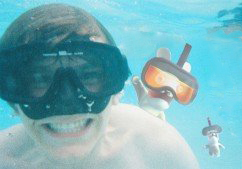 Rayman Raving Rabbids 2 - Did you miss the Rayman Raving Rabbids 2 data report post? If so, you can see how many hours the game has been played, as well as gameplay video I uploaded from one of the FPS minigames in it. Bean 1 enjoys one of the plunger FPS levels a lot (the one in the video), and can make his way through it. Every time the Rabbid shows up with a camera, he says, "Cheese!" Bean 1 also found the Rabbids LAND trailer on the Wii's Nintendo Channel earlier this week, and played it 3-4 times in a row laughing at the Rabbids in the trailer. I'm interested in Rabbids LAND on the Wii U, as I mentioned in the data post, because of Ubisoft's history/support on the Wii.
BIT.TRIP COMPLETE - If you missed my birthday post, Mrs. Coffee gave me this game(s) as a gift. I have just played BIT.TRIP RUNNER on it, but I have enjoyed the game so far. I'm up to world 1-11, I think? Considering I burned through almost the first world my first night with it, I may finish this one sooner than I was expecting. I am looking forward to hearing more about Runner2 on the Wii U, so hopefully I finish this one up soon, and perhaps be ready for more endless running when the Wii U launches.

Mario Kart Wii - Bean 1 randomly, out of nowhere, asked to play the, "Mario Wii Racing" game one day. I was surprised he remember the game from his time with it from over a month ago, and broke it out for him to try. We have both played the game, sometimes together, but often times with me watching him, or him watching me. He surprised me earlier in the week when he finished 2nd in a race, which means he's made some great improvements since he first started off by driving in circles and often in reverse.
LittleBigPlanet - This is Bean 1's final game delay tactic at night. The PlayStation 3 is the console closest to his room, and to play LittleBigPlanet is his last request/delay tactic. He enjoys finding a lot of the user created levels, and just running around in them. He completes many of them though, and I'm impressed with how he has learned to grab and hold onto items since he first started playing the game not that long ago.

Site Notes
Changes are brewing! If you haven't noticed, there's a tab that has now been removed from the top section. The "Reader Points" tab has been removed, but the "Reader Points" that were there are stored (across three emails!), and if I can get over my reluctance to go to the Post Office again, I can mail the rest...yes, they are sitting on the table, and Bean 1 has been looking at them this last week.

Also, gameplay videos (of myself playing and even Bean 1, and Mrs. Coffee occasionally) and impressions of games will become more standard on the site, and the "Critics vs. Consumers" posts will continue. Data posts will continue, but probably slow down once the Wii U releases, unless the Wii U provides the same type of data for Wii U games...PLEASE NINTENDO! I have even been experimenting, a little, with a podcast idea...

There's a few other features/ideas/changes I have been roasting for a while now, and one should be popping up at the end of next week.

Questions
What video games did you play in October, and are there any you would recommend to others? Also, were there any new coffee blends or drinks of choice in October, perhaps even while gaming?

As always, if you have any questions about the games I played, or the coffees I consumed in October, please me in the comment section below, or by sending me an email.
Posted by coffeewithgames at 10:14 AM