Call of Duty? Conduit? GoldenEye? Metroid? What is the most played FPS Wii game in the U.S.? 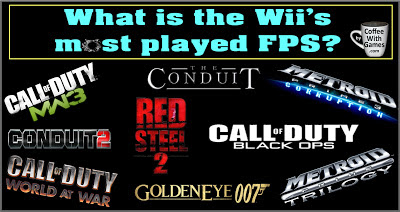 The Roast
The Wii has had a variety of first-person shooter (FPS) games released during the last 6 years, some of the more popular Wii FPS titles you can see in the image above. With more than 20 FPS games released for the Wii, at least 10 have had online multiplayer, while some have been more single player focused like Metroid Prime 3: Corruption and Red Steel 2.

What is the most played FPS game on the Wii in the United States, according to the overall total hours reported and the average hours reported "Per person" on the Nintendo Channel? Brew yourself some coffee, and let's take a look!

Call of Duty: Black Ops was released on November 9, 2010 for the Wii, with a MSRP of $49.99. The game was developed by Treyarch and published by Activision, and received an ESRB rating of "MATURE" with "Blood and Gore, Intense Violence, Strong Language" listed as content for gamers and parents to be aware of.

The data shown in the image below is for the gameplay hours reported from U.S. Wii owners, with 734 days possibly report.


The Brew
Black Ops now has approximately 200,601 Wii owners from the U.S. that have reported playing the game through the Nintendo Channel, which is about 23,428 more Wii owners that have now reported data for the game, since the data report in June.


Caffeinated Thoughts
Millions of gamers are probably playing Call of Duty: Black Ops 2 on their PlayStation 3s, Xbox 360s, and PCs as I'm typing this. While Black Ops 2 is not releasing for the Wii, as confirmed by an Activision representative in October, the Wii was home to every other Treyarch developed Call of Duty game.

I haven't played my copy of Black Ops on the PS3 in a while, but I did enjoy the online multiplayer when I played it, and the zombie mode as well. I didn't go out and get a copy of Black Ops 2 for my PlayStation 3, because I'm debating on grabbing the game with my Wii U this Sunday.

If you haven't seen any footage of Black Ops 2, take a look at the launch trailer below!

I am surprised that Black Ops on the Wii has become the most played FPS for the system, in both the hours reported "Per person" and the overall total hours reported. I thought that Call of Duty: World at War would hold onto the most played according to "Total Hours" reported because of Modern Warfare 3 potentially getting purchased and played by Black Ops players, but the data just over the last few months shows Black Ops is on a steady increase each week.

I'm really glad to see Treyarch releasing Black Ops 2 for the Wii U, and while it's unfortunate for Wii owners  that want to play Black Ops 2 but won't be getting a Wii U soon, hopefully the game makes use of the Wii U GamePad in some innovative ways that might even help sell a few more Wii U consoles to Call of Duty fans.

If you are interested in Black Ops for the Wii, or the newly released Black Ops 2, you can see links for the games on Amazon.com below:

Posted by coffeewithgames at 3:06 PM