Coffee Beans
Are you looking forward to Rabbids LAND on the Wii U? Did you play any of the Rabbids games on the Wii? We're taking the plunge, and looking at one of them today!

Rayman Raving Rabbids 2 was released for the Wii on November 13, 2007 in the U.S., and was developed by Ubisoft Paris. It released with a MSRP of $49.99, and received an ESRB rating or "EVERYONE 10+" with "Cartoon Violence, Crude Humor" listed as content for gamers and parents to be aware of.

How many U.S. Wii owners have reported playing Rayman Raving Rabbids 2, and how many hours have they reported being Rabbid rabid? Brew yourself some coffee, and let's take a look! 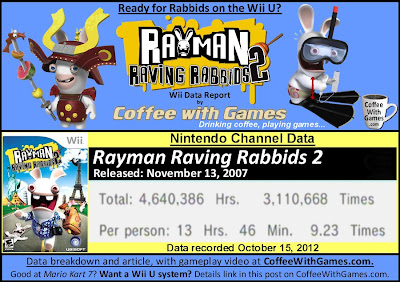 The Brew
Rayman Raving Rabbids 2 has approximately 337,017 U.S. Wii owners that have reported playing the game through the Nintendo Channel, with 1,798 days possibly reported. The players have reported 4,640,386 Total Hours of gameplay since the game released, almost 5 years ago now. The total average play-time is 13 Hours 46 Minutes "Per person, with the average time played per day/session being about 1 Hour 29 Minutes.

Caffeinated Thoughts
I am really looking forward to Rabbids LAND on the Wii U. The original Rayman Raving Rabbids was a day one purchase with our Wii system. Why? Mrs. Coffee. Growing up, she took a liking to rabbits and the original promotional videos of Rayman Raving Rabbids really caught her attention, and the humor in them helped sell her (and me) on giving the game a try. I wasn't really sure what to expect from it, but I think the original game had some of the best uses of the Wii Remote and Nunchuk in the launch titles for the system. The Rabbids dancing mini-games were the family favorite in the games, and provided us with many hours of fun.


Being that we are now pretty big fans of the Rabbids and own three of their Wii games, I really am expecting Rabbids LAND for the Wii U to be fun and funny, and I'm also expecting it to use the GamePad in some of the most unique ways out of all the launch games. If you haven't seen any promotional videos for Rabbids LAND on the Wii U, the second video is a short trailer for that game.

(If you are looking for the Wii U console giveaway details, you can find more information about it HERE!)

As for the average reported for Rayman Raving Rabbids 2, because our average is about 30 hours higher than the average reported, it makes me think most Wii owners used this as mainly a party game and would pull it out occasionally to play with friends and family, instead of playing through the majority of the mini-games and attempting to get high scores in them as we would did.

Questions
Did any of you play Rayman Raving Rabbids 2, or any of the other Rabbids games on the Wii? If so, do you have a favorite game from the series, or perhaps a favorite mini-game?

Are any of you looking forward to Rabbids LAND on the Wii U?

Check out the Rabbids related games below:

Posted by coffeewithgames at 4:33 AM