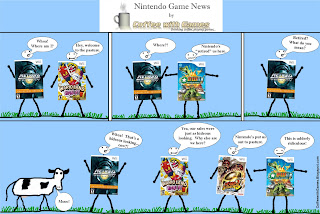 Just last Friday, I posted up that Nintendo of America confirmed, via email, that Metroid Prime Trilogy Collector's Edition

is no longer being shipped or produced in North America.

is no longer being published/shipped, I asked Nintendo if they were planning on releasing any New Play Control! Metroid Prime games to replace the Collector's Edition.

The response from Nintendo to that question was, "At this time, a New Play Control version of the Metroid Prime games has not been announced for release here in North America.  More importantly, we do not have any information that tells us this game will or won't be announced..."

MORE GAMES CANCELED!
Just today, I was able to confirm from Nintendo, via email, that Nintendo is no longer producing or shipping Battalion Wars 2, Mario Strikers Charged, or Wario Land: Shake It!.

The email I received back from Nintendo after inquiring about those games said, " Mario Strikers Charged (2007), Battalion Wars 2 (2007), and Wario Land: Shake It(2008) are no longer being manufactured or shipped to retailers."  Again, I emailed Nintendo of America, so this may be different for other Nintendo regions.

If you're interested in any of these games, make sure to grab them while you can, as they are available from either Amazon.com directly or other vendors on Amazon.com at discounted prices!


Do you own any of these games?  If so, leave a comment and let some others know what you think about them, and if you think any of them are worth buying, before they become harder to find.
Why do you think Nintendo has canceled these games?
Posted by coffeewithgames at 3:40 AM