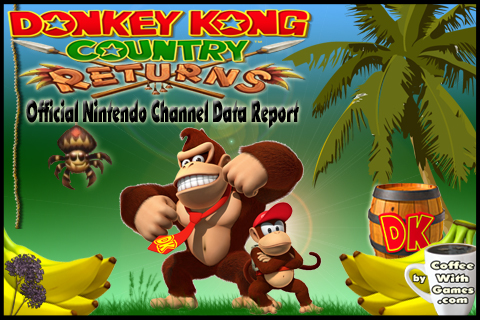 If some of you are looking for details on the 2011 Club Nintendo Calendar giveaway, you can check the "Filtered Thoughts" section of this post for the link to the giveaway information.

How many hours have Wii owners reported playing Donkey Kong Country Returns in the last 5 weeks?  Let's take a look!

Reported Player Increase:
How many more players have reported game-play data for DKCR in the last 5 weeks?
Donkey Kong Country Returns has seen an increase of about 62,358 gamers reporting game-play data, since the last report.

Average & Total Game-Play Hours Reported:
Donkey Kong Country Returns now has 830,360 Total Hours of game-play reported, an increase of 689,786 Total Hours of game-play in the last 5 weeks.
The average play-time for DKCR is 10 Hours 48 Minutes "Per person" reporting data, which is an increase of 1 Hour 12 Minutes above the average in the last report.
The average play-time per session(or day) reported for DKCR is just over 2 Hours 4 Minutes.

Filtered Thoughts:
You may recall when I mentioned in my "Christmas Gifts & My New Year's Video Game Resolution!" post that I received Donkey Kong Country Returns as a Christmas gift from Mrs. CoffeewithGames.

Well, I'm happy to say we have been playing DKCR a good bit, and we are now on World 8.  Just like when we played New Super Mario Bros. Wii, there has been some yelling and screaming at the TV[and each other :)], but also cheering when bosses/levels are beaten.

We are having a lot of fun playing the game together, and I'll do an update of some sort when we complete it.  If you haven't seen anything from the game, here are some trailers put together showing off game-play footage:


As for the data, I think the increase in "Total Hours" and the number of players reporting data, are both very good for the game, and I think both will keep steadily increasing over the next 2 months as more players are completing the game.

As for the game's Amazon.com sale rank, seeing it ranking below New Super Mario Bros. Wii and Mario Kart Wii this fast, makes me wonder if it will be like those games for Nintendo and have long sales legs.  If you're wondering how DKCR has sold already, it's been reported that Donkey Kong Country Returns has sold over 1.8 copies, though I'm not sure if that number is for North America only, or world-wide; either way, I think it's a great number.

Now, I know some of you may be wondering about the 2011 Club Nintendo Contest, and you can find the details for the contest in the "Coffee with Games CONTEST/GIVEAWAY!" post, HERE!

Questions:
Have any of you been playing Donkey Kong Country Returns in the last few weeks?  If so, what do you think about the game?

If any of you are interested in Donkey Kong Country Returns, you can see prices for it on Amazon.com linked below:

Posted by coffeewithgames at 12:51 AM