How much has Call of Duty: Black Ops been played in the weeks since Christmas?  Let's take a look! 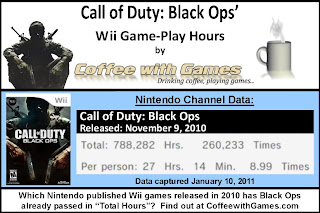 Average & Total Game-Play Hours Reported:
Call of Duty: Black Ops now has 788,282 Total Hours of game-play reported, an increase of 447,933 Total Hours since the last report.
Black Ops' average play-time is now 27 Hours 14 Minutes "Per person", which is a slight decrease of 25 minutes off the average reported "Per person" on the last report.
Black Ops' average play-time per session(or day) reported is now just over 3 Hours 1 Minute, a 5 minute decrease from the December 20 data. 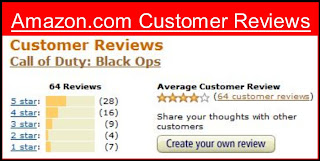 Now you may be thinking, "What Nintendo published games that were also released in 2010 has Black Ops already passed in 'Total Hours' as the image says?"
Here's an image for comparison: 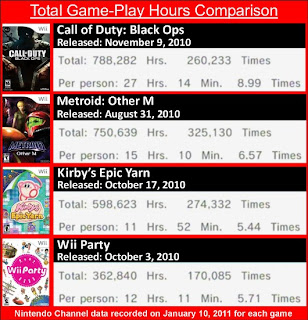 You're seeing that right, Black Ops has already passed Metroid: Other M, Kirby's Epic Yarn, and Wii Party in "Total Hours" reported.
Those aren't the only Nintendo published games released in 2010 that Black Ops has passed though, other games like Sin and Punishment: Star Successor and also Endless Ocean: Blue World have been passed as well.
For me, the biggest surprise is seeing how quickly Black Ops passed Metroid: Other M, because Other M was released 71 days before Black Ops was.

Questions:
Did any of you receive Call of Duty: Black Ops for Christmas, or get it with any money received over the holidays?  If so, what do you think of the game?  Is Black Ops a huge improvement over the previous Call of Duty Wii games, or about the same?
Also, are any of you surprised, like myself, at how quickly Black Ops has passed Metroid: Other M?

If you are interested in Call of Duty: Black Ops, you can see prices for it on Amazon.com linked below: