How many hours have Wii owners reported playing Super Mario All-Stars: Limited Edition, in the 23 days since it released?  Let's take a look!

Super Mario All-Stars has a 3 out of 5 Stars rating on Amazon.com, based on 84 customer reviews.
You can see the customer review score breakdown for it pictured below: 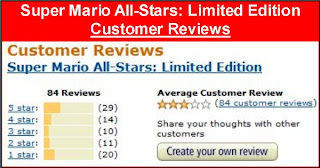 Filtered Thoughts:
I didn't purchase Super Mario All-Stars: Limited Edition, but based on the prices it's now selling for on Amazon.com, perhaps I should have picked it up when it was only $29.99!  There are a few vendors currently on Amazon that have the game priced at more than $100!
I was surprised that Super Mario All-Stars took more than 2-weeks for its game-play hours to show up on the Nintendo Channel, but considering the shorter length of the Mario games on the disc it makes sense.
Also, the gamers that purchased or received it as a gift, may have had a crazy busy December like I did, and didn't find much time to play it until after the holidays.
I'll continue to record the game's data, and I think it'll be interesting to see what the average hours "Per person" are for Super Mario All-Stars in a few months.

Questions:
Did any of you purchase or receive Super Mario All-Stars: Limited Edition?  If so, what do you think of the package as a whole, with the soundtrack CD and 32-page booklet?  Was the collection and disc worth the $29.99, and could you justify purchasing it for a lot more, like the prices on Amazon.com?


If you are interested and want to see how much vendors are selling the game for on Amazon.com, you can see them linked below:

Posted by coffeewithgames at 11:46 PM