Coffee Beans:
Is the 3DS

really just recycled technology(and games) from the Nintendo 64, Virtual Boy, and DSi being duck taped together?
Or, does the 3DS really offer awesome new technology that will change(once again) the way we play games? 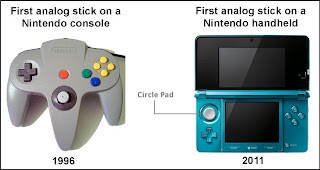 The 3DS doesn't just take the analog stick idea from the N64's controller though, as the 3DS is also taking games from the Nintendo 64's software library.  It's getting at least two N64 games that are being "remade" with 3D effects, updated graphics, and different controls.
Those games are The Legend of Zelda: Ocarina of Time 3D and StarFox 64 3D 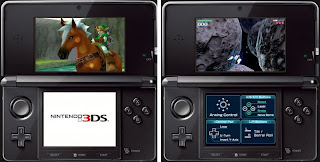 What does the 3DS take from the Virtual Boy?
The Virtual Boy was Nintendo's first and last console that displayed "true 3D graphics"...that is until the 3DS is released world-wide this February and March.
While the Virtual Boy is considered a failure by many, I think the Virtual Boy was motivation for Nintendo to keep experimenting/improving with "true 3D" display and game-play.
In the recent "Iwata Asks: Nintendo 3DS" feature, Mr. Iwata said, "That's why even when Nintendo failed with the Virtual Boy, the company stubbornly persisted, putting 3D circuits in the Nintendo GameCube and making a Game Boy Advance system with a built in 3D LCD."


I guess in a way, we can thank all those Nintendo fans that showed an interest, and endured headaches, with the Virtual Boy, because without the Virtual Boy...the 3DS may not have been developed.

What does the 3DS take from the DSi?

Other than a few extra cosmetic appearances such as an extra external camera lens, the circle pad, and rearranged button placements, the 3DS looks very similar to the DSi's design, even the DS Lite's. 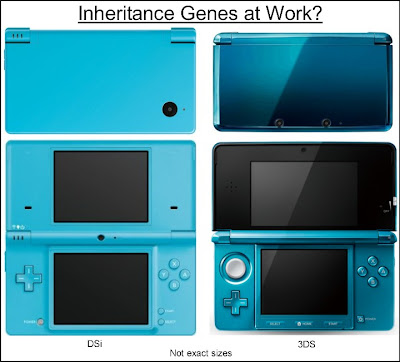 Not only does the 3DS keep same basic design of the DSi and DS Lite systems, but it's also confirmed the 3DS will be backwards compatible with both DS Lite and DSi games, and the 3DS will continue with a DSiWare type service, under the new name "eShop".

Filtered Thoughts:
So, does the Nintendo 3DS really offer awesome new technology that is about to change(once again) the way we play games?

Well, the 3DS is clearly more graphically powerful than Nintendo's current handhelds available, and I'm sure many people are/will be glad for the update in graphical power.


Graphics aside, I think the biggest marketing/selling feature for the 3DS though,  is clearly its 3D technology.  Hence its name...3DS.(I know, I know, Captain Obvious point)

I think the "true 3D" capabilities, coupled with the the two external cameras, and the built-in motion sensor and gyro sensor, have great potential for creating new game-play elements in existing game genres, and in possibly helping create new genres altogether.

As for 3DS games, I'm most interested in trying out the AR games(AR = augmented reality), but I really don't know if I can justify $250 for those alone.
One reason I could maybe justify $250 for the 3DS, is the 3DS Activity Log.  What is it?  Take a look:

I'm trying to get more information on this "Activity Log", but this page definitely shows the "Play Time" of 3DS games and apps.  If this ends up being like the Nintendo Channel data, with it being reported by lots of 3DS users, I would probably get a 3DS just for doing data stories alone...I'm a sad human being!
While I think the 3D feature is the 3DS' biggest selling point, I don't really know if Nintendo thinks that.
In the "Iwata Asks: Nintendo 3DS" feature, Mr. Miyamoto was speaking about how the 3DS is backwards compatible, and also said this about 3D for 3DS games, "New game cards, however, will be specific to Nintendo 3DS, but whether they will be in 3D or not is basically up to the maker, just like how much to use the touchscreen was up to developers for Nintendo DS."

Now, it's great and all for Nintendo to allow developers freedom to make decisions, but if Nintendo won't make some standards in regards to 3D use for the 3DS, I think that's a problem.
I'm sure most developers will of course implement "true 3D" into 3DS games, but I really think Nintendo should implement some standards, and currently not having any standards for "true 3D" in 3DS games makes that feature even more like a gimmick to me.
I'm still definitely interested in the system, and I even have a 3DS reserved already, but I can't say that I'm excited for the 3DS...perhaps that will change once I demo one.
While I don't doubt that the 3DS is offering solid new technology, if Nintendo wanted to release a new "true 3D" system without 3D standards, and the ability to sell us old games again, they could have just duck taped a Nintendo 64, Virtual Boy, and DSi together!  It would have saved them the R&D costs put into the 3DS, and the lack of "true 3D" standards wouldn't matter, because few people would want to experience the headaches associated with the Virtual Boy.
I guess I'm wondering why they spent the time and money investing in this new 3D technology, if they aren't going to make it a standard for the system.

Questions:
Do you think Nintendo should have some "true 3D" standard for 3DS games?  Are any of you interested in the 3DS, and already have one reserved like me?
If you are really excited about the 3DS, what about it has you the most excited?

If you haven't reserved a Nintendo 3DS yet, you can click the images/links below to be taken directly to Amazon.com's pre-order page for the systems:
Posted by coffeewithgames at 1:12 AM