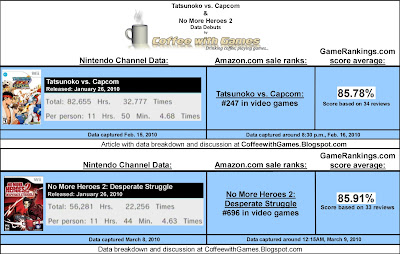 Thoughts/Questions:
I still have not played either No More Heroes 2 or Tatsunoko vs. Capcom.
I think the data shows that Tatsunoko vs. Capcom's online play(I think), has helped it to steadily increase since it debuted, in the average hours "Per person" reported.
No More Heroes 2 seems to be sitting pretty close to the number of hours, "Per person" that was originally reported with its debut.
If you have played them, do you find yourself still playing the games, or did you play them for a while and have since stopped?


If you are interesting in either of these games, you can see new and used prices for them on Amazon.com below:
Posted by coffeewithgames at 6:40 PM