Rage of the Gladiator: A Perfect Fight

The Brew:
This isn't a review of the game, just some thoughts on the game and a video showing some game-play.
Rage of the Gladiator was released on March 15, 2010, through Nintendo's WiiWare service.
The game can be purchased for only 1000 Wii points, which equals $10.
I first, would like to say, that most of the "reviewers" that have "reviewed" Rage of the Gladiator, didn't even finish playing the game's Challenge Mode, before they writing reviews for it.
If you're reading reviews for Rage of the Gladiator, please be aware that many of them contain incorrect information about the game.

(He wants mead!  I want coffee!)
Rage of the Gladiator features three control methods when playing the game:
When playing with the motion controls, you can go under the "Options" and change the Wii Remote & Nunchuk sensitivity settings.
If you have enjoyed Punch-Out games, old or new, you should enjoy Rage of the Gladiator.
A Few Video Details:
The video below is me fighting Tagon, in the game's normal mode.
The story says that Tagon is fighting in the arena, to acquire more mead.  I would not fight for mead, but coffee perhaps!
I was using the NES-style controls when fighting him in the video.
In the video, I use two special attacks during the match.
Rage of the Gladiator features a skill tree, that consists of three branches: 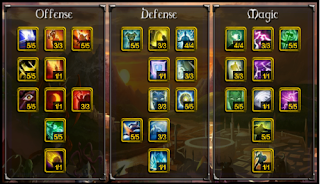 (Skill Tree, are you skilled enough to fill it?)
The first special attack I use happens around the :35 mark into the video.
It is known as the Aerial Assault.  A portion of the game's description reads, "An insane combo that unleashes your rage by doing a series of jumping attacks."  The Aerial Assualt can be upgraded three times and it falls under the "Offense" branch of the skill tree.
The second special attack starts around 1:40 into the video.
It is known as the Ancient Tornado, and the description reads, "A mystical combo that conjures a raging Tornado which lays waste to your opponent."  The Ancient Tornado falls under the "Magic" branch of the skill tree.
Did You Notice?
You may not have noticed in the video, but the different special attacks actually do different amounts of damage to Tagon.
The further down the skill tree the attack is, the more damage it will do.
The Ancient Tornado is the third level down in the Magic branch, while the Aerial Assualt is on the first level of the Offense branch.
Also, at the end of the match, you can see the "Fight Stats" the game shows when you complete each match. 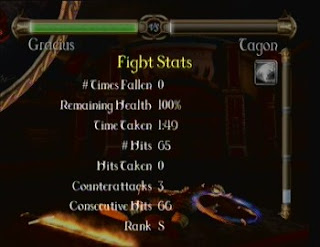 (I think I passed!)
You can see in the picture above, "Hits Taken: 0", so I was given "Rank: S".
Rage of the Gladiator gives out four different ranks:
It is absolutely possible to complete the game with a "Rank: S" on each boss fight.  So far, I've completed the game with a "Rank: S" in each fight, using the NES-style controls.  I'm currently replaying the game, using the Wii Remote

controls, attempting to get a "Rank: S".
All attacks in the game can either be dodged, blocked, or counter attacked to prevent from being hit.
Questions:
If you've been playing Rage of the Gladiator, what control method are you playing with?
Have you completed the "Challenge Mode" within the game as well?
If anybody has any questions about Rage of the Gladiator, please send an email to CoffeewithGames@gmail.com and I'll try to answer any question you may have about the game.
If you haven't purchased Rage of the Gladiator, you can purchase a Wii Points card from your local store, or even Amazon.com.  Or, you can go directly to the Shop Channel and purchase 1000 Wii Points on the system directly.
Posted by coffeewithgames at 2:32 PM

Email ThisBlogThis!Share to TwitterShare to FacebookShare to Pinterest
Labels: Rage of the Gladiator, Video, WiiWare