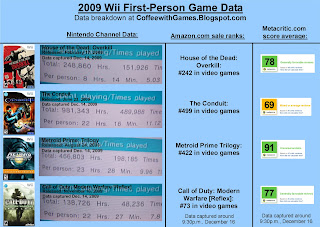 House of the Dead: Overkill has had 30,203 players report play-time data on the Nintendo Channel, since the game released in February.

The Conduit was released in June, and has had 44,063 players report play-time data on the Nintendo Channel.

Metroid Prime: Trilogy has had 19,898 players report their data, since the game released in August.

Last, but definitely not least(well, maybe), Call of Duty: Modern Warfare [Reflex] was released just in November and has 6,184 players report data on the Nintendo Channel.

Starting this week, I'll show Amazon.com's position for the games and the MSRP, which Amazon.com is usually below the MRSP just a little.

Thoughts:
Call of Duty: Modern Warfare [Reflex] was the only game out of these four, this week, to see an increase of game-play data reported by 1,000 more players than last week.  Metroid Prime: Trilogy, for some reason, isn't in stock on Amazon.com now, and it's only available from 2nd or 3rd party vendors on Amazon.com.
If The Conduit can pull in another 20,000 hours of reported game-play by next week, it will finally cross 1,000,000 "Total Hours" reported played.

Posted by coffeewithgames at 10:15 PM