My wife and I celebrated Christmas today with our families, and this was our son's first Christmas.  We've had an enjoyable, but extremely busy, day.  I know many of you that read my blog probably had video games on your Christmas list.  I don't know if any of you had New Super Mario Bros. Wii on your Christmas list, but if you did, I would like to know if you actually received the game, or did "Santa Clause" have trouble with supply from his shop this year and not deliver it?

I know most of the websites and stores starting in December had trouble keeping the game in stock, I think making it 2009's video game Tickle Me Elmo or Furby.  Even Amazon.com now says that New Super Mario Bros. Wii won't be back in stock until January 1. 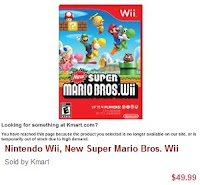 Did you receive any games for Christmas,  or even a Nintendo Wii Points Card, PSN Card or Xbox Live Arcade Card and purchase any games?

Even if you didn't receive what you wanted for Christmas, I hope you had a great day and were able to enjoy it with friends and/or family.

Posted by coffeewithgames at 2:52 AM