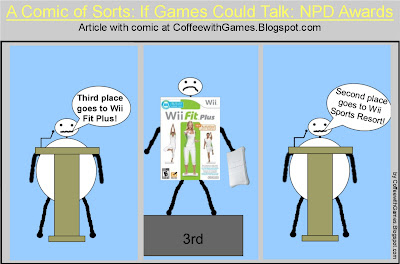 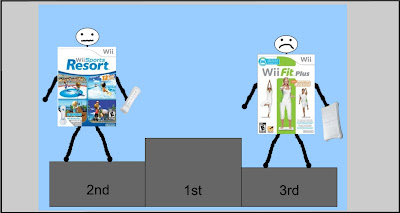 As the comic attempts to show, New Super Mario Bros. Wii ranked first out of all Wii games sold in November.
The NPD just released their sales numbers for November, and Nintendo had nine games in the "Top 20".
The Nintendo games that were in the "Top 20" that had reported sales numbers were:

The other four Wii titles in the "Top 20" were:

The Nintendo DS had one title make the NPD "Top 20", and that title was Mario & Luigi: Bowser's Inside Story.

Out of the eight Wii games in the November "Top 20", the only one that was actually released in November, was New Super Mario Bros. Wii which was released on November 15.

How have these games performed game-play wise?  Well, with data from the Nintendo Channel and MetaCritic.com, we can see how many reported hours these games have been played and also how they've been reviewed by the gaming community at large.  Let's take a look: 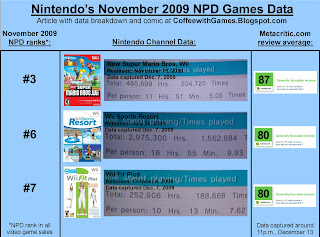 Wii Sports Resort was released in July of this year, and has 157,400 players reporting data so far.

Wii Fit Plus was released in October, and has 24,759 players reporting data.

Mario Kart Wii was released in April of 2008 and since then has had 1,332,046 players report play-time data on the Nintendo Channel.

Mario & Sonic at the Olympic Winter games was ranked 12th in the NPD "Top 20".

As the pictures show, New Super Mario Bros. Wii is currently the highest rated game out of these, sitting at 87% out of 100%.  Wii Play, the game that has sold the most of all games this console generation, is sitting at the lowest review score average, 58% out of 100%.  I think I would rather pay $50 for Wii Play, and get an extra controller that actually functions, than to pay $120 for Tony Hawk: RIDE and a controller(board) that doesn't seem to function well at all.

I do find it interesting, that out of the "main" games, Mario & Sonic at the Olympic Winter Games has the lowest average review score and also has the lowest reported play-times.

I think it's pretty crazy how well some of these games are still selling, and how poorly some other games are selling(games like Uncharted 2 on the PS3 falling off after one month!).  Out of the six Wii games shown here, I actually don't own any of them(and I don't know what the "value game bundle" consisted of).  I also don't own Mario & Luigi: Bowser's Inside Story.

Do you own any of these games?  If so, did you purchase them recently, or did you get them right after they were released?

Posted by coffeewithgames at 10:40 PM