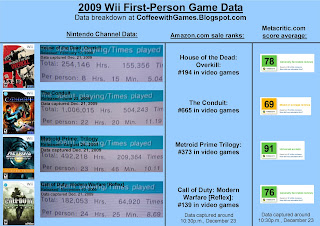 House of the Dead: Overkill has had 30,824 players report play-time data on the Nintendo Channel, since the game released in February.

The Conduit was released in June, and has had 45,061 players report play-time data on the Nintendo Channel.

Metroid Prime: Trilogy has had 20,708 players report their data, since the game released in August.
Call of Duty: Modern Warfare [Reflex] was released just in November and has 7,470 players report data on the Nintendo Channel.

Starting this week, I'll show Amazon.com's position for the games and the current selling price, because Amazon.com is usually below the MRSP just a little.

Thoughts:
Again, Call of Duty: Modern Warfare [Reflex] was the only game out of these four, this week, to see an increase of game-play data reporting by 1,000 more players than last week.  Metroid Prime: Trilogy, for some reason, still isn't in stock on Amazon.com, and it's only available from 2nd or 3rd party vendors.

I think it will be interesting to see how these games perform in the few weeks following Christmas, and if we'll be able to tell from the number of players reporting data, if it looks like gamers received some of these games as gifts.
Did any of these games make your Christmas list?

Posted by coffeewithgames at 2:09 AM