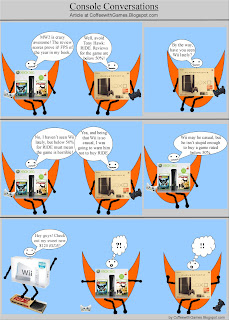 I showed a few weeks back how Tony Hawk: RIDE on the Wii was selling better than the Xbox 360 and PS3 versions of Tony Hawk: RIDE.  I explained how I wasn't sure what Wii owners were buying it, other than the "casuals", because I couldn't figure who would buy a $120 game without looking at reviews.  I decided to keep track of the game over the past week, and see how the sales data was comparing between the different versions on Amazon.com.

So how has Tony Hawk: RIDE continued to perform well on Amazon.com's sales chart, after the horrible review scores for the game?

Take a look at Tony Hawk: RIDE's Amazon.com sales data for the PS3, Xbox 360, and Wii, over 8 days, taken at random times during the days. 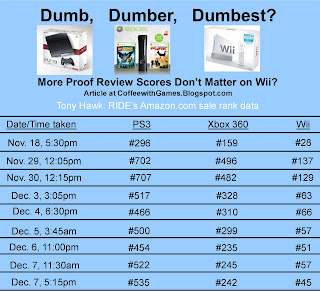 As of my searching today, I found only one TV commercial for Tony Hawk: RIDE and you can watch it for yourself. 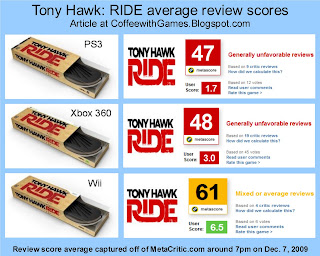 Now you may be thinking after seeing the average review scores, "Well, the Wii version does have a higher average, so maybe it's the better game and that's why it's selling better?"  Well, if you take a close look at the picture, it shows that the Xbox 360 version has been reviewed by 19 reviewers, the PS3 version by 9 reviewers, and the Wii version by only 4 reviewers.  The reason for some of this, is that when a PS3 copy is reviewed, they often will count it as the Xbox 360 review as well, and vice versa.  This means that lot of reviewers, though Tony Hawk: RIDE is essentially the same game on all consoles, aren't showing a review score for the Wii version.

Kevin Cassidy, of GoNintendo.com, said this about Tony Hawk: RIDE, "Tony Hawk: RIDE seems to be quite the disaster, doesn't it? Review scores have been very bad, with more negative comments coming in. I had absolutely no intentions of buying the game based on the wave of negative press, but just yesterday Activision dropped a copy of the game off. I tried playing it...some friends tried playing it...and we all almost killed ourselves. The board doesn't do what it's supposed to do...at all. Expect a review in the near future."

Do you think the Amazon.com data shows that a Wii game can sell well, regardless of review scores, as long as it's advertised on TV?  Should Wii owners(and others) be able to return the game and board, if it doesn't perform like it's expected?  Or, are people buying the game responsible for knowing how the game plays, before they buy it?

If you've purchased Tony Hawk: RIDE and believe the reviewers are way off base, like Tony Hawk himself does, please leave a comment and let me know what you think of the game!

Maybe all of this just proves that Michael Pachter was correct when he said, "I think that Metacritic scores are irrelevant for people who don't look at them - how's that for obvious? While there are many Wii owners who are hardcore and who care very much about scores, there are many - perhaps half - who are quite casual, and wouldn't know Metacritic if it fell on them.  Clearly, somebody's buying Carnival Games, Jillian Michaels Fitness Ultimatum, etc,. A well positioned game with an interesting concept can sell well on the Wii regardless of review scores, and I think that is what Peter's talking about."

What do you think?

Posted by coffeewithgames at 8:01 PM