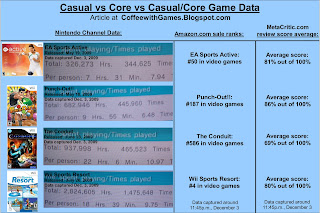 43,403 players reported data for EA Sports Active on the Nintendo Channel this week, an increase of 1,122 players reporting data.

EA Sports Active was the only game of the four this week, to see it's Amazon.com sales rank decrease.

Last week, EA Sports Active was ranked #6 in video games, and when I captured the data this week it was ranked #50.

The Conduit increased to #586, from #645 last week, on Amazon.com's video game sales rank.

Wii Sports Resort, as well as other Nintendo titles like New Super Mario Bros. Wii and Wii Fit Plus with Balance Board are continuously ranking in the Top 10 on Amazon.com's overall video game sales rank page. Take a look at Amazon.com's Top 10 sales in the video game category, at the time of posting this:

This should be the last week for these games to be compared directly, I'm doing a "reorganization" of sorts and it should start fresh next week!  Until then, are there any games you've picked up recently on the Wii(or other consoles) that you've been enjoying and putting many game-play hours into?  Are you playing any of the four games compared in this article?  If so, leave a comment and let me know what you think of them!

Posted by coffeewithgames at 1:18 AM