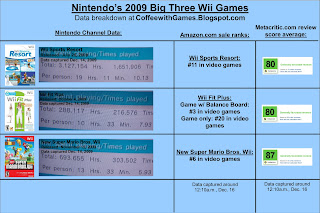 Wii Sports Resort was released in July of this year, and has 163,070 players reporting data so far.

Wii Fit Plus was released in October, and has 27,310 players reporting data.

The review score averages for the games has stayed the same, only New Super Mario Bros. Wii gained one more review score to it's total, bringing it to 73 "MetaCritic" reviews and counting.

It should be noted, New Super Mario Bros. Wii, at the time of this post(Dec. 16, 12:45am), is sold out on Amazon.com, Target.com, ToysRUs.com, and is backordered on BestBuy.com.

As of around 8:10pm(EST) WalMart.com was sold out of the game as well, but looks to have it back in stock now.

Last week I stated, "The sale ranks for the three games on Amazon.com, probably don't reflect the true sales, because Amazon.com did actually sell out of New Super Mario Bros. Wii, and won't have the game back in stock until Dec. 13!  While Amazon is doing pre-orders, it's probably definitely affected sales of New Super Mario Bros. Wii, with customers going elsewhere to buy the game online."

From the data I've seen, with the different websites being out of stock this week, it looks like that may very well be true.  While Amazon.com did get New Super Mario Bros. Wii back in stock on December 13, it sold out again that same day!

Something I find interesting:

To any of the readers that have already bought and played through New Super Mario Bros. Wii, if you've beaten the game, have you found yourself going back to play it again?  Or is one play-through of the game enough for you?

The same as last week, I'll keep this until the data for Monday, December 28 is updated and I can see if my "prediction" was right.

Posted by coffeewithgames at 1:13 AM