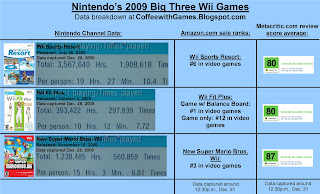 Wii Sports Resort, released in July of this year, has 183,520 players reporting data so far.

Wii Fit Plus, released in October, has 38,580 players reporting data.

Wii Sports Resort's Amazon.com sale rank was #6 and the current selling price is $47.79.

New Super Mario Bros. Wii's Amazon.com sale rank was #3 and Amazon.com won't have the game back in stock, until January 3, but they are selling it for $49.99.

The review score averages for the games have stayed the same since last week, but I wonder if there will be any new reviews for any of these games from reviewers that maybe received any of these games as gifts, but hadn't played them yet.

Back on Friday, December 11, I predicted that New Super Mario Bros. Wii would cross one million game-play hours reported as of Monday, December 28, and as the data shows this week, it did just that.

Then, last Tuesday, December 22, I said, "I'm going to make a guesstimate, and say that New Super Mario Bros. Wii will clock in right around 1,300,000 reported game-play hours on the Nintendo Channel next week."  As the data shows, the game had 1,238,485 "Total Hours" reported, making my guesstimate 61,515 hours over my guesstimate, not to shabby I guess for a non-analyst.

Did anybody receive New Super Mario Bros. Wii, Wii Sports Resort, or Wii Fit Plus for Christmas or other holidays?  If so, what are your thoughts and opinions about the games from what you've been able to play?

Posted by coffeewithgames at 5:05 PM