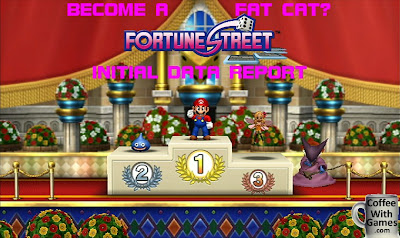 Coffee Beans
Fortune Street was released in the U.S. on December 5, 2011 with a MSRP of $49.99. The game was developed by Square Enix, and published in the U.S. by Nintendo.

Fortune Street has a local multiplayer option for 1-4 players, as well as online multiplayer, and it is classified as a "Board Game" by Nintendo. The game received an ESRB rating of "Everyone" with "Comic Mischief" listed as the only content for parents and gamers to be aware of.

How many hours have Wii owners reported playing Fortune Street in the last several months, and does it appear to be fortunate for Nintendo? Let's take a look! 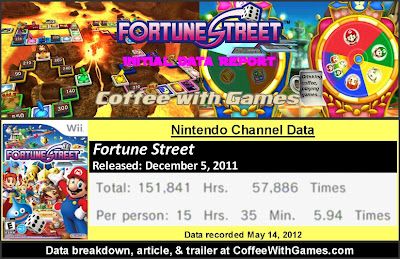 The Brew
Fortune Street has approximately 9,745 Wii owners that have reported game-play data through the Nintendo Channel, since the game released in the U.S. in December.  The game's average play-time per day/session reported is 2 Hours 37 Minutes.

Caffeinated Thoughts
I have not played Fortune Street, and if you have not played it the trailer below will help give you an idea of some of the game-play elements you can expect from it:

While researching a bit on the game for this post, from what I read it appears to be a digital Monopoly of sorts, but with Nintendo and Square Enix characters and settings.

Fortune Street was already a popular video game series in Japan, and this was the first version of the game to be released in the U.S. Retailers like Amazon.com and GameStop.com both have Fortune Street's "list price" still as $49.99, but you can find the game discounted and on sale at different times if you watch for it. Currently, Amazon.com has it on sale for just $37.50.

While Wall Street is known for having its "fat cats", I'm not sure if that would apply to any of Fortune Street's characters, but perhaps some fans have learned enough from playing it to turn their video game success into real life success.

Being this is the first game from the Fortune Street series to get a U.S. release, I think Nintendo has seen good fortune with it just based off of the reported game-play data showing up quickly, especially considering the very mixed reviews it has received from critiques and consumers.

Questions
Have any of you played Fortune Street? If so, is my analogy of a "digital Monopoly" close to how the game plays out?
If you own it have you played any/many online games, and if so, how did the online games play out?

If you are interested in Fortune Street, or perhaps even Monopoly, you can see a few products linked below: