Coffee Beans
What do you get when you mix a mythological game setting like the God of War series has, with game-play from the Punch-Out!! series? Well, I think the results would be Rage of the Gladiator.

Rage of the Gladiator was released on March 15, 2010 through Nintendo's WiiWare service, and has a price point of 1,000 Wii Points, which is $10. The game was developed and published by Ghostfire Games, and it received an ESRB rating of "Teen" with "Alcohol Reference, Animated Blood, Violence" listed as content for gamers and parents to be aware of.


Rage of the Gladiator's game-play hours just arrived on the Nintendo Channel this week, and how many hours have U.S. Wii owners spent battling bosses in the arena? Brew some coffee, and let's take a look! Boss battle included! 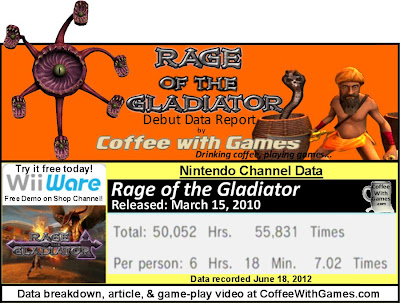 The Brew
Rage of the Gladiator has approximately 7,953 U.S. Wii owners that have reported data through the Nintendo Channel for its debut, with 826 days of data possibly reported. The game has an average play-time per day/session of 53 Minutes, with the total average "Per person" being 6 Hours 18 Minutes.

While WiiWare games are harder to find "user reviews" for because of the digital distribution, the game has a "professional" review score average of 82.08%, based on 19 reviews on GameRankings.com.

Rage of the Gladiator's U.S. release has made Ghostfire Games about $79,530 before taxes and profit sharing with Nintendo, just based on the number of players that have reported data and the game's $10 price point.

Caffeinated Thoughts
I purchased Rage of the Gladiator the day it released on the WiiWare service, and I have thoroughly enjoyed the game. While the average hours reported show just over 6 hours of game-play, you may be wondering, "How many hours do you have reported Coffee?"

Glad you asked! The image below shows how many hours we have reported for the Coffee House:

If you're wondering, you should easily get 10-20 hours of game-play out of the main mode and the game's Challenge Mode, if you think you are up for the "Challenge"! I think I can definitely say I have gotten my money's worth out of the game!

If you don't know anything/much about Rage of the Gladiator, as I mentioned in the introduction, the game controls a lot like the Punch-Out!! games, which is great in my caffeinated opinion, but with the camera positioned in a first-person perspective.

The game's mythological setting though, inspired by games like God of War's, allowed the developers to get really creative with the bosses in the game, and the types of attacks the bosses use are creative and varying. The game also has "Special Attacks", sort of like Star Punches in Punch-Out!!, that you can use after unlocking/upgrading them. I thought most of the bosses, their attacks, and the "Special Attacks" in the game were all done really well.

Here is a video of the first boss battle from the game's Challenge Mode. I am using the game's Wii MotionPlus control setting, which allows for the up/down swing attacks you will see:

If you are perhaps now interested in Rage of the Gladiator, make sure to download the free WiiWare demo for it on the Nintendo Shop Channel. It will allow you to battle the first three bosses in the game's regular mode, and give you a look at the skill tree as well.

Questions
Have any of you played and beaten Rage of the Gladiator, even finishing Challenge Mode? If so, did you finish the game with the highest "Best Rank" possible in each battle?

If you own the game, but have not completed the game's Challenge Mode, was there a particular boss battle you got stuck on, or reason you didn't complete it?

If you are interested in Rage of the Gladiator, you can purchase it directly off the Wii's Shop Channel using a credit card, or by using a Wii Points card as seen below:

Posted by coffeewithgames at 6:04 PM