Coffee Beans
For a while now, Amazon.com has had the few Wii U games they have listed as showing with MSRPs/list prices of $49.99; that changed yesterday.
Amazon.com had the Wii U titles Ninja Gaiden 3: Razor's Edge, Tekken, and Dirt all listed with $49.99 MSRPs. Amazon.com updated their listing prices on those Wii U games yesterday though, and they now appear with a MSRP of $59.99. 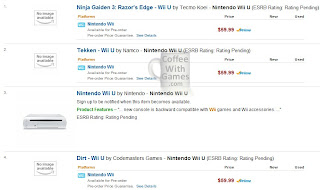 Welcome to the HD gaming generation?

Caffeinated Thought/Question
While some Wii owners may not be happy about the $10 increase from the Wii's MSRP for most games, at least it's not a return to the Nintendo 64's days (yet), when I paid $70 for some N64 games. While I'm cheap with my money, as long as games use the Wii U's controller and/or online services in unique ways, I will be okay with the price increase.
Do you think Amazon.com raising the prices of these listed Wii U games confirms that most of the console's games will list at $59.99?
Posted by coffeewithgames at 9:40 PM