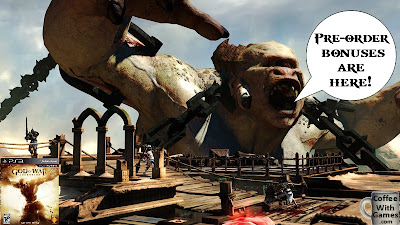 Coffee Beans
God of War: Ascension is currently scheduled for release on March 12, 2013. The game is being developed by Sony's Santa Monica Studio and will provide more backstory on Kratos (think the Star Wars pre-quels giving more information on Anakin/Darth Vader, but hopefully better received!).

The game has yet to receive an ESRB rating, but based on the game-play they showed for the game at E3 this year, I say we can safely assume God of War: Ascension will retain the "Mature" rating past God of War games have received.

Now with only 8 months and 17 days until the game releases, Amazon.com just announced a pre-order bonus for God of War: Ascension. Is it a life sized Kratos? A bag of Greek coffee? Or, something game related? Let's take a look!

The Brew
Customers that pre-order God of War: Ascension from Amazon.com will receive not just the Mythological Heroes Multiplayer pack, but now they will now also get the armor for Achilles, Perseus, Orion, and Odysseus.

Four sets of armor, just for pre-ordering the game. I wonder how far this game will go with retailer bonus battles, and if we will perhaps see Game Stop and other retailers soon announcing pre-order bonuses?

How will the pre-order bonus work? In short, Amazon will email codes for the armor "within two days" of Ascension's release. You can see Amazon.com's full description of the "Bonus Offer" in the image below:

Questions
Are any of you big God of War fans, and perhaps looking forward to God of War: Ascension next year? Will a pre-order bonus offer perhaps sway your decision as to where you buy the game?

If any of you are interested in Amazon.com's pre-order bonus for God of War: Ascension, you can see the game's "Standard" and "Collector's" editions linked below:

Posted by coffeewithgames at 9:36 PM