Black Ops 2 Wii U is Happening. 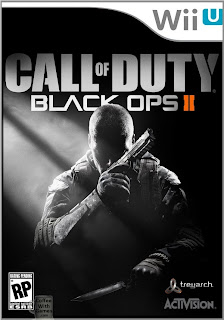 Coffee Beans
*UPDATE #2: Call of Duty: Black Ops 2 has been confirmed to be releasing only for the Nintendo Wii U, and not any other Nintendo system. You can read the post and what an Activision representative said about the issue HERE.

What did Nintendo have to say/show about Black Ops 2 on the Wii, Wii U, or even the 3DS during their 2012 E3 press conference, and during E3 in general? Nothing.

Does this mean that Call of Duty: Black Ops II won't be releasing for the Wii U? No, and I believe there is more than enough evidence that shows Black Ops 2 will release on the Wii U in the launch window, and it will also offer some great use of the Wii U's GamePad for controls.

So, with the current official release date for Black Ops 2 being 11-13-12, November 13th, what is this "evidence" for Black Ops 2 releasing on the Wii U, probably as a launch title, later this year? Brew yourself some coffee, and let's take a look!

The Brewed Evidence
When the Wii released in 2006, Call of Duty 3 was one of the many launch games for the system. The game was developed by Treyarch, and published by Activision. While it did not feature online multiplayer, or offline, Treyarch seemed to get the Wii Remote and Nunchuk controls implemented pretty well, considering it was a Wii launch title.

In 2007, Call of Duty: Modern Warfare released for the PlayStation 3 and Xbox 360 consoles, but the game was not released for the Wii. Why? Modern Warfare was originally developed by Infinity Ward, and not Treyarch. Infinity Ward chose not to develop a Wii version, so Wii owners did not have a Call of Duty title in 2007.
Call of Duty: World at War was released on November 11, 2008 for the Wii, and the other consoles. The PS3 and 360 versions featured cooperative play and introduced the Nazi-zombies mode, and while the Wii version lacked those features, World at War Wii did introduce online multiplayer for up to 8 players.

On November 9, 2010, Call of Duty: Black Ops released for the Nintendo Wii. Black Ops was developed by Treyarch and released for all the home consoles on that very same day.

Call of Duty: Modern Warfare 3 released on November 8, 2011 and was developed with Infinity Ward leading development for the PS3, Xbox 360, and PC versions, as well as Sledgehammer Games and a few other developers helping with development. At the same time the "HD" console versions were being developed, Call of Duty: Modern Warfare 3 was being ported to the Wii by a team at Treyarch, and released on November 8, 2011 for the Wii along with the other console versions.

Caffeinated Thoughts
So, what do all the Call of Duty games have in common that were released for the Wii? The common connection is the key piece of evidence as to why I think Call of Duty: Black Ops II will be on the Wii U this holiday season, and probably offer some of the best uses of the Wii U's GamePad for a FPS title as well.

I will be looking for Nintendo and Activision to confirm this before the Wii U launches though, because if the Wii U does not get the next title from the biggest FPS series in gaming right now, that would be very concerning to me for the Wii U moving forward.

Personally though, if Black Ops 2 is announced for the Wii U, it would probably become an instant day one purchase for me if online multiplayer is confirmed, because I appreciate the work Treyarch has done getting the Call of Duty games on the Wii, and making them not just run well, but also making them a lot of fun.

*UPDATE: A reader on GoNintendo.com, majestik12, commented on this story linked there, asking why some comments from Treyarch weren't mentioned in this piece. While the only comments from Activision and Treyarch I had seen "officially" on Black Ops II Wii U are the typical PR, "We don't have anything to say about that." lines when questioned about the game.

Majestik12 also mentioned a magazine scan from a Nintendo related magazine that was leaked just over a week ago now that "confirms", at least until the magazine copy is released and it's either proven real, or proven real fake, that Black Ops II will be releasing for the Wii U this November. You can see the scan and story on it HERE. Call of Duty Black Ops 2 Heading For Wii U.

Questions
Agree, or disagree? Do you think that based on Treyarch's history with the Call of Duty games on the Wii, that Call of Duty: Black Ops II will be in the launch window for the Wii U?

If Nintendo were to somehow fail in getting Black Ops II on the Wii U, would that make you concerned for future third party support of the Wii U console?

You can see the Call of Duty Wii games on Amazon.com below, as well as Black Ops 2 for the PS3 and 360 which you can pre-order. If a Wii U listing shows up, I'll try and remember to add it below as well Black Ops 2's listing on GameStop.com has been added below, it is the only box art for Black Ops 2 on the Wii U:

Posted by coffeewithgames at 2:47 AM