Coffee Beans
What happens when you play Punch-Out!! from the Virtual Console, and Rage of the Gladiator a lot? Eventually, Punch-Out!! Wii may land on your list of "Wanted Games", as it did mine. Then what? Well, if you are/become a father, and your wife looks at your "Wanted Games" list, as Mrs. Coffee did mine, it may show up one year for Father's Day. Last Sunday, Father's Day, that's just what happened in the Coffee House!

Punch-Out!! was originally released for the Wii on May 18, 2009 with a MSRP of $49.99. The game was developed by Next Level Games, and published by Nintendo. The game received an ESRB rating of "Everyone 10+" with "Cartoon Violence, Comic Mischief" listed as content for parents and gamers to be aware of.

Last year, on August 28th, Punch-Out!! joined the Nintendo Selects lineup of games, and can now be found for under $20 brand new.

How many hours have U.S. Wii owners spent boxing in Punch-Out!! over the last 3 years since it released, and how many more U.S. Wii owners have reported data on the game since March 2011? Brew some coffee, and let's take a look! 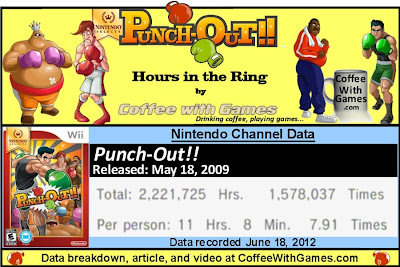 The game has an average play-time per day/session now reported as 1 Hour 24 Minutes, just a 1 minute decrease from the last average reported on.

Caffeinated Thoughts
So far, I have enjoyed my time with Punch-Out!! over the last week. I have won both the Minor and Major Circuit belts so far, but have yet to start the World circuit.

If you haven't seen any footage of Punch-Out!! for the Wii, below is a video of a match against Glass Joe from the game's "Exhibition" mode.

Exhibition mode allows you to box against opponents you have already boxed against in the game's "Career" mode, and it also throws in a few "Challenges" for each boxer to help add replay value to it.

I haven't played it on a high-definition television, but the cel-shaded graphical style is crisp, and Punch-Out!! should look great even for future video game generations.

So far, my reported game-play time is showing up as 2 Hours 22 Minutes over "4 Times" reported, making my average reported play-time per session just over 35 minutes.

Questions
Have any of you played/purchased Punch-Out!! for the Wii since it was added to the Nintendo Selects lineup last August?

If you have played Punch-Out!! Wii, did you complete the game's "Career" mode and all of the challenges in the "Exhibition" mode?

If you have not played Punch-Out!! on the Wii, you can see the original and Nintendo Selects versions on Amazon.com below. Make sure to purchase the lower priced version!