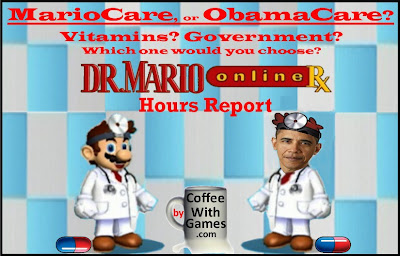 Coffee Beans
Politics. Love the topic, hate the topic? Don't care about it?  Either way, if you have heard any news from outside of the video game world in the last day it probably had the words "Supreme Court", "ObamaCare", "Upheld", or something along those lines in it.

Dr. Mario Online Rx released on May 26, 2008 on the Wii, through the WiiWare service. The game released with a price point of 1,000 Wii Points, which is $10, and can still be downloaded for that price today. The game was developed by Arika and published by Nintendo. It received an ESRB rating of "Everyone" with no content listed for gamers and parents to be aware of.

The 2011-2012 flu season has "officially" ended, and with the U.S. Supreme Court upholding ObamaCare, The Patient Protection and Affodable Care Act (PPACA), bill today, I thought now would be a good time to take another look at Dr. Mario Online Rx.

How many hours have Wii owners reported playing Dr. Mario Online Rx in the last 8 months? Brew yourself some coffee, and let's take a look! 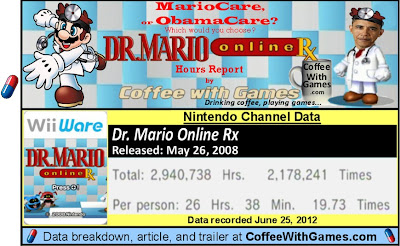 The game's average play-time per day/session is 1 Hour 20 Minutes, which is the same as 8 months ago. Dr. Mario's WiiWare outing has seen an increase of 268,561 Total Hours of game-play reported, over the 2011-2012 influenza season.

The game has a "professional" review score average of 72.95%, based on 19 reviews on GameRankings.com.

How much has Dr. Mario Online Rx made Nintendo from its U.S. WiiWare release? Just over the last 8 months, the game has made Nintendo about another $78,210. The total amount for the game is now $1,104,020 just based on the number of U.S. players that have reported data and the game's $10 price point.

Caffeinated Thoughts
If you have not see any footage or don't know much about Dr. Mario Online Rx, the video below gives a good overview of what you should be able to expect from the game:


As for my questions in the images above, "Vitamins? Government? Which one would you choose?" I would pick vitamins. As for "MarioCare, or ObamaCare?" I would definitely pick MarioCare.


Politics is great and all, at least if you're on the money making end of it, but Dr. Mario has already provided great solutions for fighting and defeating viruses for over 20 years now. Would you prefer a vitamin treatment and video game time for a virus as suggested by Dr. Mario, or would you prefer mandated insurance and the IRS as suggested by President Obama? Personally, I would go with vitamins and video games every single time.

Questions
Have any of you purchased Dr. Mario Online Rx in the last 8 months, and if so, do you know about how many hours you have played the game?


Keeping it simple, and civil, would you select MarioCare or ObamaCare?
Posted by coffeewithgames at 5:44 PM