Coffee Beans
Are you taking a summer vacation? The 2012 summer season is officially upon us here in the U.S., as of last Wednesday, June 20th.

What if someone offered you, and up to three other family members, a vacation package that included horseback riding, miniature golf, white water rafting, sky diving, surfing, and even snowboarding as just a few events as part of an all inclusive vacation package for only $29.99? Sound crazy?

Well, the vacation package's official description reads, "Go horseback riding around the mountain, ride jet-skis along the beach, or just take a long car ride on the island." I know, still crazy right? Well, with the wonderful digital worlds provided by video games, this very "all inclusive" vacation package is available, and yes, now for the very low price of just $29.99. Where can you sign up, right?

Go Vacation released for the Wii in the U.S. on October 11, 2011 with a MSRP of $39.99. The game was developed by Namco Bandai Games, and published by Namco Bandai for its North American release. It received an ESRB rating of "Everyone 10+" with "Cartoon Violence" listed as content for gamers and parents to be aware of.

How many hours have Wii families spent on vacation in Go Vacation with 258 days possibly reported? Brew some coffee, relax, and let's take a look! 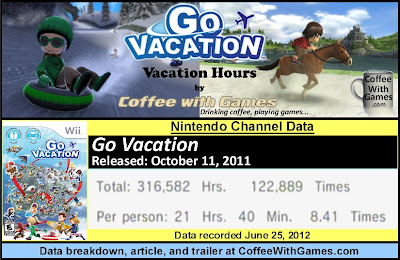 The Brew
Go Vacation has approximately 14,612 U.S. Wii owners that have reported vacation game-play hours on Kawawii Island, in the last 8 months since the game released. The game has an average play-time per day/session of 2 Hours 34 Minutes, so each day/session played that is reported for Go Vacation is averaging to just over 2.5 hours each.

Go Vacation's game-play hours first debuted on the Nintendo Channel this past December 26th, at which time its average hours "Per person" reported was just 12 Hours 27 Minutes. The current reported average "Per person" is now 21 Hours 40 Minutes, which shows Wii owners have continued to play Go Vacation during the last 6 months.

What about Go Vacation reviews? Is this an island resort recommended by others? Does the virtual vacation spot of Kawawii Island appear to offer a solid staycation alternative, to a real vacation?

Caffeinated Thoughts
If you have not seen any footage for Go Vacation, and some of the different activities the game offers, the video below may give you a decent idea of what the game has to offer:


If last October someone had said to me, "Coffee, you should check out Go Vacation.", I probably would have dismissed it just off of the title. I remember watching the early trailers for the game, and it seemed like a Wii Sports Resort game copy of sorts, and apparently that's what Namco Bandai was aiming for.

I like that Go Vacation does not require a Wii MotionPlus unit/controller to play, but those controls are offered as an optional control method if you prefer. The game also has Wii Balance Board support for some of the skateboarding and snowboarding events I believe, but I'm not sure what else. Am I interested in Go Vacation though? More than I thought I would be actually!

When I was putting together this piece last night and this morning, I read many of the customer reviews for the game, and it seems the game offers a wide variety of mini-games to play. While not all the mini-games appear to be as "fun" or well controlled as others, apparently once you get used to the controls in most of the mini-games, you can get many hours of fun from Go Vacation.
I think the reported game-play data for Go Vacation helps confirm that Wii owners are enjoying the game a good deal, more than the average "professional" reviewer did for sure. I wouldn't expect the game to have an average of over 20 hours "Per person" reported if it was really bad, and certainly not be 20% points higher in the overall review score from customers, than the average "professional" review.

So, what's that say for the "professional" review score average for Go Vacation? Not much. I think it just shows that you should try a game if you think you might be interested in it, and not really worry with reviews for it.

Will I give Go Vacation a try though? It may actually now land on my "Games Wish List", as a potential game for our oldest Bean to play around in, after reading a few of the customer reviews on it.

Questions
Have any of you played Go Vacation, and if so, what mini-game have you found to be most enjoyable and gotten the most hours out of? If you have played Go Vacation and Wii Sports Resort would you recommend one game more than the other?

Most importantly, if you have played Go Vacation, would you recommend it to other Wii owners that are perhaps looking for a game like Wii Sports Resort, but perhaps don't own a Wii MotionPlus unit/controller?

If you are interested in Go Vacation, you can see it linked on Amazon.com and GameStop.com below:

Posted by coffeewithgames at 2:25 PM