Conduit 2 was developed by High Voltage Software, and published by Sega.  The game received a "Teen" rating from the ESRB with "Animated Blood, Language, Mild Suggestive Themes, Violence" listed as content for gamers/parents to be aware of.

It was officially announced on March 29, 2010 that Conduit 2 was in development.  The game is a direct sequel to the original game, The Conduit, but it has several new features such as local multi-player and WM+ control support.  Conduit 2 can also be patched(and has been) to hopefully address any issues that may pop-up in the game.

With Conduit 2 being the sequel to one of the Wii's most-hyped FPS games, did Sega's approach of not advertising Conduit 2 with any commercials, and relying only on name-recognition payoff for them?  Let's take a look!

Conduit 2's sale price on Amazon.com was also recorded each day, and is shown above each date/time and sale rank point on the chart. The chart has the graph lines reversed so the higher the line on the chart, the better the Amazon.com sales ranks.

Critical Reception
Conduit 2's "professional" review score averages started being published on the internet on April 19, the day it released.

Conduit 2's current "professional" review score average is 67.16%, based on 32 reviews on GameRankings.com. 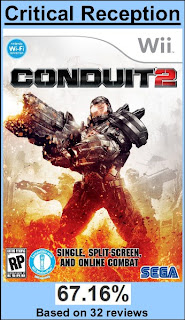 The game currently has a 4.5 out of 5 Stars rating on Amazon.com, based on 13 customer reviews. Conduit 2's customer review score average is 87.69% when the reviews are converted to a 100% review scale.

Filtered Thoughts
The Conduit released on June 23, 2009.  The game had a lot of hype from High Voltage Software, the game's developer, before it released, and Sega even helped the game along by releasing two commercials for it.

I have followed Amazon.com sales ranks on different games for a while now. The original game, The Conduit, may have been the first game I actively followed on Amazon.com.

As the links above show, The Conduit did pretty well initially on Amazon.com, especially when compared to Conduit 2.

I don't know what happened from the original game to Conduit 2, but for some reason HVS and/or Sega didn't feel the sequel needed as much promotion as the original.  Why would a publisher release a game on the console with the largest installation base and not put out one single television advertisement?  I have no idea, but I would love to ask the people that made that decision, "Why?".

If Sega was really relying on The Conduit's name-recognition only, I would say that was a major failure on their part; and I think the sales chart above and the lack of Conduit 2 information in April's NPD data verifies that.

If you have not seen any footage from Conduit 2, below is the first trailer released for the game.

Also, do any of you think it's odd that Sega/HVS did not put out any commercials for Conduit 2?

If any of you are interested in Conduit 2, you can see prices for it on Amazon.com linked below: