Coffee Beans:
Mortal Kombat was released on April 19, 2011 for both the PS3 and Xbox 360.  The game released with a "Standard" edition for $59.99, a "Collector's Edition" for $99.99, and a "Tournament Edition" for $149.99.
Mortal Kombat was developed by NetherRealm Studios, and published by Warner Bros. Interactive Entertainment.  The game received a "Mature" rating from the ESRB, with "Blood and Gore, Intense Violence, Partial Nudity, Strong Language" listed as content for parents to be aware of.

Did more PS3 owners or more Xbox 360 owners apparently purchase Mortal Kombat during its 11 days on the market in April?  Did the PlayStation Network crash/downtime affect Mortal Kombat's sales ranks on the PS3 compared to the Xbox 360 version, and was this apparent?  Let's take a look!
Chart Info:
The chart above shows the sales ranks for Mortal Kombat's "Standard" edition on the PS3 and Xbox 360, with sales ranks recorded from April 19 through April 30, 2011.  The sales ranks were recorded from the overall "Video Game" sales ranks each time.  All times recorded/shown as Eastern Standard Times.
Not only did I record the date/time, but I also recorded the sale price of each version as Amazon.com had it listed at the time I was recording the sales ranks.  The sale price is listed on each date on the chart.
The chart above is not supposed to be a replacement of NPD sales numbers, but is designed to be a supplement with the NPD numbers and perhaps give us an idea of what the sales for each console version of Mortal Kombat were during April.

Overall Sales Rank Average:
Mortal Kombat on the PS3 had an overall sale rank average of #3 for the 11 days it was available in April.

Mortal Kombat on the Xbox 360 had an overall sales rank average of #7 for the 11 days it was available.

Critical Reception:
The game's "professional" review scores started being published on the internet on April 19, the day the game released. 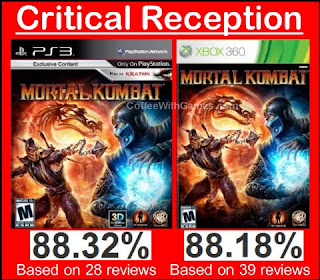 The game has a 4.5 out of 5 Stars rating on Amazon.com on the PS3, based on 92 customer reviews.
Mortal Kombat on the PS3 has a customer review score average of 91.30%, when the reviews are converted to a 100% review scale.

Filtered Thoughts:
I was really, really, really surprised to see the PS3 version of Mortal Kombat consistently outrank the Xbox 360 version in April, mainly because I thought word-of-mouth spreading about the PlayStation Network being down would hurt the PS3's version; but I think the data shows my thought was incorrect!
I also found it surprising that the PS3 version's lowest sales rank, was the Xbox 360's highest sales rank during the 11 days it was available in April.  After the first week of the PSN outage and the price drop to $49.99, I thought the Xbox 360's version would see a significant increase in ranks, and perhaps pass the PS3's version; but that did not happen in April.
The PS3 version included Kratos as a playable character, and perhaps that helped keep it ahead; but this data along with the Marvel vs. Capcom 3 data from back in March, I think shows that PS3 fans really enjoy their fighting games.  Based off the data, I think it's pretty clear that fighting games are more popular on the PS3, than they are on the Xbox 360.

Questions:
If you purchased Mortal Kombat, and you own both a PS3 and Xbox 360, was the PSN going down(and still being down) a factor in you deciding which version to purchase, if you didn't pick it up day one?
If you own Mortal Kombat on the Xbox 360 and have been playing it online, how do you think the online runs for the game?  Also, are any of you surprised the PS3 version consistently outranked the Xbox 360 version, considering the downtime of the PSN?

If you are interested in Mortal Kombat, you can see prices for both versions on Amazon.com linked below:
Posted by coffeewithgames at 5:19 PM