Metroid was originally released on the NES in North America on August 15, 1987.  It was released in Japan and in Europe as well.

Metroid was re-released on the Wii's Virtual Console in North America on August 13, 2007.  It is available for download off the Wii's Shop Channel for 500 Wii Points.

The data pictured below was collected 1,105 days(3 years, 9 days), since Metroid was re-released. 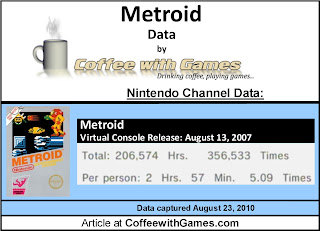 Sales Info:
Nintendo has made approximately $350,225 on Metroid, based off the Nintendo Channel data.  I checked at about 4:30PM, on 8-29-10, and Metroid was not listed in the Virtual Console's "Most Popular" games; which displays the Top 20 most popular Virtual Console games.

Thoughts:
So, are Wii owners playing the original Metroid off the Virtual Console?  I would say the data shows most are playing it to completion, though maybe not much more.

It has been an extremely long time since I played Metroid.  If you haven't played it in many years like myself, perhaps the brief "informational" video from the Nintendo Channel will help you remember what it was like:

Questions:
Have you played Metroid in the last year? If not, how many years has it been? For me, it has been probably 15+ years since I have played it.