It took 371 days for Real Heroes: Firefighter's play-time data to debut on the Wii's Nintendo Channel.

Approx. Number of Players Reporting Data:
Real Heroes: Firefighter has 6,040 players reporting their play-time data, for its debut on the Nintendo Channel.

On Amazon.com, Real Heroes: Firefighter has a 4.5 out of 5 Star customer rating.  The 4.5 out of 5 Star customer rating would put the game at a 90% review score average; nearly 20% points higher than the "professional" review score average.
Out of 26 customer reviews for the game, twenty-five reviews were rated either 4 or 5 stars.  There was only one customer rating of "1 star", but when I read it, it was clear the low score was not for the game itself, but with an issue of receiving a version that would not play on their Wii (PAL vs. NTSC). 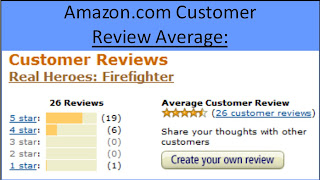 Thoughts:
I have not played Real Heroes: Firefighter, but I am interested in the game.  I like the idea behind it, and think that there is potential for a franchise with it.
I am surprised the game has taken a year for any play-time data to show up on the Nintendo Channel, as I thought the lower MSRP of $29.99 initially, would have helped with sales.  Perhaps the game didn't ship a large number of units initially, and it's just been a really "slow burn" title on the Wii?
Questions:
Has anybody played Real Heroes: Firefighter?  If so, what are you thoughts on the game?  Is it something you would recommend to other Wii owners that enjoy the FPS genre, and are perhaps looking for something a little different?
If anybody is interested in Real Heroes: Firefighters, you can see new and used prices on Amazon.com linked below:
Posted by coffeewithgames at 3:07 PM