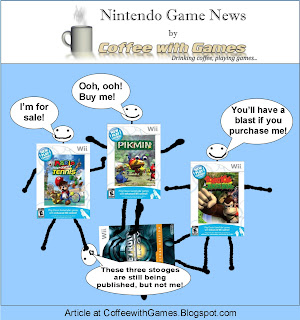 (rehashed from the previous article!)
A few weeks back, I broke the news that Nintendo of America wasn't shipping Metroid Prime: Trilogy

anymore in North America.  I provided some quotes in the original story and thought that would be the end of it.

Earlier today I was browsing GoNintendo.com, seeing what news was happening on the Nintendo side of the gaming world.  I saw a title posted up, "Amazon drops Metroid Prime Trilogy at Nintendo's request".  I didn't realize this was still an evolving story, so I clicked the link to the original source and it brought me to Joystiq.com.
The title on the original article was, "Amazon: 'Per Nintendo, we will no longer be offering Metroid Prime Trilogy'", written by Alexander Sliwinski.

The first line of the article reads, "Nintendo continues to drag its feet on an official response about Metroid Prime Trilogy's retail status, though online retailer Amazon tells Joystiq that the game has been discontinued."
It baffled me, because I already had given a quote from the official response I received from Nintendo in the original article.  Why is Nintendo dragging its feet?

Then a little further down in the article, I read a line that stated, "Nintendo refuses to acknowledge it ever made the statement that the game was 'no longer being shipped.'".
This line didn't baffle me, as much as it shocked me.  If Nintendo wasn't acknowledging they made the statement, did that make my article false and show me as a liar?

Well, I quickly sent an email over to Joystiq to get it straightened up.
It seems that Nintendo's PR department wouldn't simply state the game wasn't being shipped anymore, because I didn't provide a direct source, other than stating it was a quote I received from Nintendo.

I really can't figure out why a billion dollar company like Nintendo has communication issues with the press.  They know whether or not Metroid Prime: Trilogy is being shipped/produced anymore, but because they didn't have the original source, they were just going to deny it, making me out to be a liar?

So, did I lie in my original story, since Nintendo "...refuses to acknowledge..." what I stated?

Just click each picture and they will open larger, or you can "right click" and choose to "open in new window" or "open in new tab". 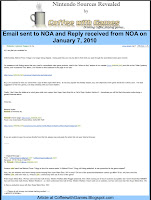 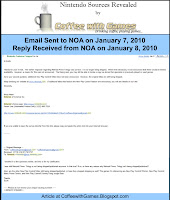 If you noticed, I had two different sources at Nintendo confirm the same thing, Metroid Prime: Trilogy is no longer shipping(in North America).
The first source was a Ms. Barbara Soules.
The second source was a Mr. Bruce Mann.
Also, you can see where I asked if the New Play Control! titles Pikmin, Mario Power Tennis, and Donkey Kong Jungle Beat were still shipping.  Mr. Mann replied that "...the original titles are still being shipped."
The employees did nothing wrong.  They were both extremely professional and pleasant in their responses. They simply were replying to questions I had submitted.
Question:
Why do you think Nintendo of America has refused to acknowledge this with a "public" statement, when they already confirmed it via email...twice?
Nintendo or GolinHarris, if you would like to issue the statement to me, my email address is CoffeewithGames@gmail.com.


If you haven't purchased the game, now may be the best time to get try and find it locally.  Amazon.com has it available from 2nd/3rd party vendors, but the asking price is more than the MSRP, as you can see from the picture below!

Posted by coffeewithgames at 3:32 AM