What Red Steel 2 should keep from the original Red Steel: Part 1 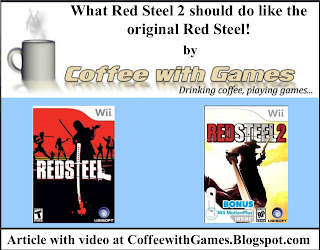 on the Wii was released more than 3 years ago.  It was available as one of the Wii's release titles, and the game seemed to have a lot going for it from hands-on previews leading up to its release.
Matt Casamassina, of IGN, said during a preview in October 2006, before Red Steel released, "As it turns out, the latest build of Ubisoft's shooter plays much better than the game did in New York -- to the point, in fact, where many of our former concerns have been cast aside. And yet, the control is still not as sensitive or as responsive as we would like. Strangely enough, however, Red Steel is somehow still fun -- still engaging and enjoyable -- despite its shortcomings."

A month later, after Red Steel released, Matt "reviewed" Red Steel and gave it a 6.0 out of 10.  He cited the game's controls as the biggest reason for his score.  I definitely don't agree with his score on the game, and most IGN.com readers don't either.  Red Steel has a 7.7 out of 10 average, from 192 IGN.com reader reviews.
I don't consider Matt's opinion of the game a "review", as much as I consider it lazy.  After reading his review again, I doubt he even finished the single-player campaign for Red Steel.  He didn't mention how long it took him to beat, which the game provides you with when you finish.  He also failed to mention the levels have ranking systems, that judge your accuracy and give you a grade for each level when they're completed.

Now that I've gotten that out of the way, Red Steel 2

is due to be released on the Wii in North America on March 23, and Europe on March 26.
I've played through the original Red Steel twice, and I enjoyed the game.  I admit Red Steel is not a perfect game, but there are some things that I hope Red Steel 2 will retain and improve upon from the original game.

What is the first thing I hope Red Steel 2 keeps and improves upon?

Explosions!
Did you notice the poor guy in the explosion around 1:14 in the video?  He comes into the top left of the shot, at the top of the stairs.  You may have missed it, it happens so fast!
I think the explosions in the original Red Steel look great and I hope that the explosions in Red Steel 2 look awesome as well.  I know Red Steel 2 has a different graphical style, so I'm really interested to see how the explosions look in the game.

Questions:
Have you played the original Red Steel, if so, what do you think about the game?  Is there anything you hope that Red Steel 2 does like the original game?

If you're interested in either game, you can take a look at them on Amazon.com right below.  Red Steel 2 requires the Wii Motion Plus accessory to play the game, so the bundle showing for Red Steel 2 includes WM+.

Posted by coffeewithgames at 1:30 AM