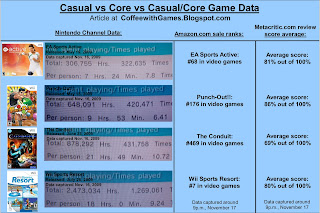 I think The Conduit is going to see a pretty significant decrease in the average number of hours reported each week, now with Call of Duty: Modern Warfare [Reflex] being released.  I'll keep an eye on both, and see if it looks like The Conduit has been affected by Call of Duty's release.

Wii Sports Resort and Punch-Out!! both seem to be in their own little world, increasing steadily each week and have more of an increase in players reporting data each week.

Did you buy Call of Duty: Modern Warfare [Reflex], or do you own The Conduit and are sticking with it instead?

Posted by coffeewithgames at 10:02 PM