Is the Wii's Pudding Tainted! 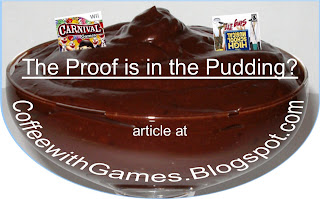 According to The Word Detective, “The proof is in the pudding” is a popular figure of speech meaning “the quality, effectiveness or truth of something can only be judged by putting it into action or to its intended use” and when applied to food, according to The Word Detective, "A dish may have been made from a good recipe with fresh ingredients and look delicious, but you can really only judge it by putting it in your mouth. The actual taste is the only true criterion of success."

I've applied the statement, "the proof is in the pudding" to the gaming world, particularly, the idea that Wii games sell well, despite being reviewed poorly.
Analyzing what analyst Michael Pachter said, "A well positioned game with an interesting concept can sell well on the Wii regardless of review scores..."
For the sake of this example, "pudding" would be poor review scores for games, and  "proof" would be how well those games sold.

Is Michael Pachter correct?  Are there Wii games that have sold millions of copies that were reviewed poorly, or "regardless of review scores"?

While some may think those games are poor examples to use, let's take a look at several games that have only been out a few weeks.

A picture says a thousand words, so here you go: 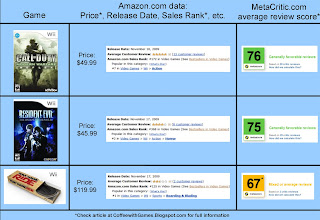 What do you think of the information displayed in the photo?

How is it that Tony Hawk: RIDE on the Wii has a higher sales rank than does Resident Evil: The Darkside Chronicles and Call of Duty: Modern Warfare [Reflex]?

A couple of reasons I think could explain it:

1)  Tony Hawk: RIDE isn't rated "Mature" like the other two

2) The Wii's "casual" crowd that "...wouldn't know Metacritic if it fell on them.", is buying the game because they are used to Wii games selling with peripherals, and they want to try something new.

Tony Hawk: RIDE is another example right now of a game that is reviewing poorly, but selling better on Amazon.com than other games that have reviewed better than it.

What do you think of the Wii's game market and the way seemingly "bad" games, sell well.

*The prices, sales rank, and Metacritic.com score averages were gathered on Sunday, November 29, between 4p.m. and 5p.m.

A couple of links you may find interesting based around this topic:

MetaCritic scores not important, but genre and franchise continuations are.

The pressure of MetaCritic scores.

Critics Speak, We Listen, Why?

Posted by coffeewithgames at 2:43 AM