Tony Hawk: RIDE was released yesterday on Sony's PS3, Microsoft's Xbox 360, and Nintendo's Wii.  While the Tony Hawk series had released on consoles in the past, this is the first time the Tony Hawk series uses a new skateboard peripheral, that must be used to play the game.
From initial previews of the game, it seems that all three versions of Tony Hawk: RIDE are very similar in game-play, just the graphics being "better" for the PS3/360 version compared to the Wii version of the game.
Amazon.com is the only place I know to track a game's sales rank, so which version it doing the best? 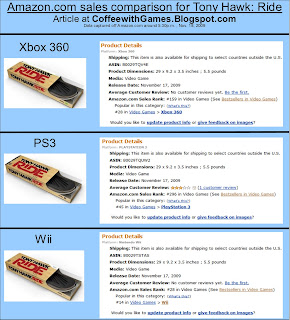 Amazon.com allows us to see how Tony Hawk: RIDE is selling within each consoles own video games listing, as well as compared directly to the sales rank of other consoles.  As the photo shows, the data was captured off Amazon.com around 5:30p.m. on November 18, 2009(today!).

Tony Hawk: RIDE on the Xbox 360 had a sales rank of 159th overall in the video game category.

Tony Hawk: RIDE on the PS3 had a sales rank of 296th overall in the video game category.

Tony Hawk: RIDE on the Wii had a sales rank of 28th overall in the video game category!

I was really surprised to see the Wii version ranked higher than the PS3 and the Xbox 360 version.  I found it interesting the PS3 version of Tony Hawk: RIDE is performing extremely poor in Amazon.com's sales rank compared to the Xbox 360 version, considering both are basically identical, graphics and all.
I'm not sure if perhaps the Wii's "casual" audience is showing through more on Amazon.com, and perhaps the "core" gamers that own 360s/PS3s are busy playing Call of Duty: Modern Warfare 2, or perhaps PS3/360 owners prefer to lounge(be lazy) while playing their games and not "move" a lot like some Wii games have required, is showing in the sales numbers.
Or, maybe the PS3/360 owners bought Tony Hawk: RIDE in stores, and that will be reflected more in the NPD numbers for November.  I think it'll be interesting to see the NPD numbers and see if Tony Hawk: RIDE debuts in the Top 10 for any console, and if those numbers will reflect what Amazon.com's sales numbers are showing.

Did you, or are you going to purchase Tony Hawk: RIDE?  From what you've played or seen of the game what are you impressions of it?