Wii's Release Games, Three Years in the Making: Legend of Zelda, Excite Truck, Need for Speed, and Call of Duty

Three years ago today, on November 19, 2006, Nintendo released the Wii.  Since the Wii's release, Nintendo has done several updates to the system, and one of the updates was the Nintendo Channel.  I've been posting the data for several games off the Nintendo Channel for several months now.  Today, I'll be showing games that were released with or very close to the release of the Wii, and how those games have performed over the last three years. 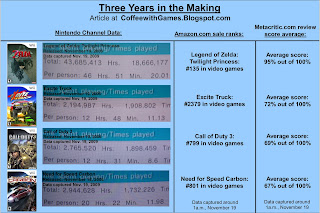 The Legend of Zelda: Twilight Princess has had 932,842 players reporting game-play data.

Excite Truck has had 171,500 players reporting game-play data on the Wii's Nintendo Channel.

Need for Speed Carbon has had 144,593 players report game-play data in nearly the last three years since the Wii's release.

What was the first Wii game(s) you purchased with your Wii?  Looking back, how do you think that game(s) would play now, if you haven't played them in a while?
What were you playing three years ago, today?

So, how has Wii Sports done compared to these other games.  I know I posted some numbers for Wii Sports about two weeks ago, but you can have another look at the updated numbers for this week!

Wii Sports has had 2,790,530 players report game-play data on the Wii's Nintendo Channel since it released three years ago.
Wii Sports is also currently the most played Wii game as of Total Hours reported played.

*It should be noted, that the data collected off the Nintendo Channel, is not updated on a daily basis, it is updated on a weekly basis.  The game-play shown, would probably be from Nov. 19, 2006, probably through Nov. 15, 2009.

Posted by coffeewithgames at 2:34 AM