The NCAA vs. The NFL: Wii Nintendo Channel Game Data

NCAA Football 09 All-Play has been the only NCAA football game released on the Wii, and it came out last year on July 15, 2008.  Electronic Arts also released Madden NFL 09 All-Play for the Wii last year on August 12, 2008.  Hearing a lot of talk of NCAA college games this past week, and in particular today with the LSU versus Alabama game, got me wondering.  I wondered why Electronic Arts canceled the NCAA games on the Wii after last year's release, so I decided to see if the Nintendo Channel had any game play data for NCAA Football 09 All-Play, or if the game sold so poorly, that the hours never got high enough to have any data reported.
Take a look at how NCAA Football 09 All-Play and Madden NFL 09 All-Play compare with data from the Nintendo Channel! 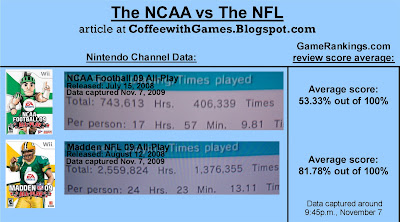 Looking at the numbers, I do think it helps to remember that the NCAA football games on all consoles, sell less than the Madden football games, with that being said:

According to VGChartz, NCAA Football 09 All-Play has sold about 130,000 units.  If 130K is the correct number of  units sold, that would mean about 32% of the players are reporting data on the Nintendo Channel.

I find it interesting, that according to the NPD data from last August, Madden on the Wii sold 115.8K units in just August last year, yet in the entire year following Madden's release, it wasn't able to get 115.8K players to report data on the Nintendo Channel out of the supposed 820,000 players that purchased it.

I think NCAA Football 09 All-Play's review score of 53.33% is horrible, and along with low sales, may be what contributed to Electronic Arts canceling NCAA on the Wii this year.

Have you played either of these games, if so, what is your opinion of either of them?  Do you have a favorite NCAA team or NFL team?

I don't have a favorite NCAA team, but my favorite NFL team is the Tennessee Titans, even with their awesomely horrible 1-6 record this year.

Posted by coffeewithgames at 1:12 AM