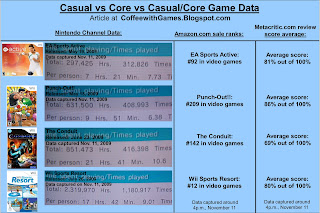 The Conduit had 39,283 players reporting data.

The Conduit saw a significant price drop in the past week.  The Conduit had a MSRP of $49.99.  Amazon.com, GameStop.com and BestBuy.com all dropped the game last week to a MSRP of $29.99 last week.  Amazon.com put The Conduit on sale this afternoon for $18, and it's sale's rank jumped all the way to #76 at the time I'm writing this.

Call of Duty: Modern Warfare[Reflex] was released yesterday, and I think it's in direct competition with The Conduit, and I'll be watching to see when it debuts, and how quickly it moves up in hours.

If you haven't bought The Conduit before now, will you buy it at the new MSRP of $29.99?

I bought The Conduit in June, on it's release day, and it has became my 4th most played Wii game.  If you haven't played The Conduit and are interested in it, the multi-player is definitely a buggy/glitchy game, but can be fun if you have patience with it.  The single player campaign was good fun and provided many hours of game play, so if you've been holding out on purchasing it, now is probably the right time.