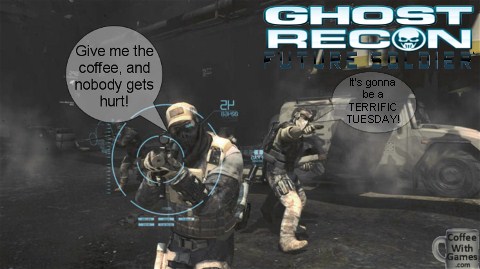 If you are perhaps thinking, "Coffee, I'm not sure which one of these games would interest me.", well I have provided trailers for both games below the break. Take a look!

The Brew
First up, Dragon's Dogma (because it's first alphabetically!):


Caffeinated Thoughts
I have not purchased either one of these games, though both look like they could be a lot of fun. I have only read small snippets on both, as I try to not get too many impressions/opinions on games before I play them, but they both appear to be very well developed games.
With my time in Monster Hunter Tri, Dragon's Dogma does have some appeal to me, considering it was also developed and published by Capcom, like MHT.
Tom Clancy's Ghost Recon, yes the original, was a Christmas gift to me many years ago from my brother, and I thoroughly enjoyed the game back then, and I still have it in my small collection of PC games. Being that I enjoy the shooter genre a good deal, Ghost Recon: Future Soldier has me more interested out of the two new releases today.

Questions
Are any of you purchasing Dragon's Dogma and/or Tom Clancy's Ghost Recon: Future Soldier today? If so, which one(s) are you getting? If you have already had the chance to play them, what do you think of what you have played?

If you are interested in purchased Dragon's Dogma and/or Ghost Recon: Future Soldier, you can see a few product links for them below:

Posted by coffeewithgames at 3:03 PM